Meinhold, hired by the Lotte Giants in the Korea Baseball Organization (KBO) in November as their new director of pitching, previously served as the New York Mets' assistant pitching coach and minor league pitching coordinator.

Before that, Meinhold was a scout and a pitching development analyst for the St. Louis Cardinals. And while with the Cardinals, Meinhold doubled as a pitching coach for the U.S. under-18 national team.

In addition to his professional pitching and coaching experience, Meinhold has an academic background in kinesiology and exercise science. He later earned a Master's degree in sports administration. 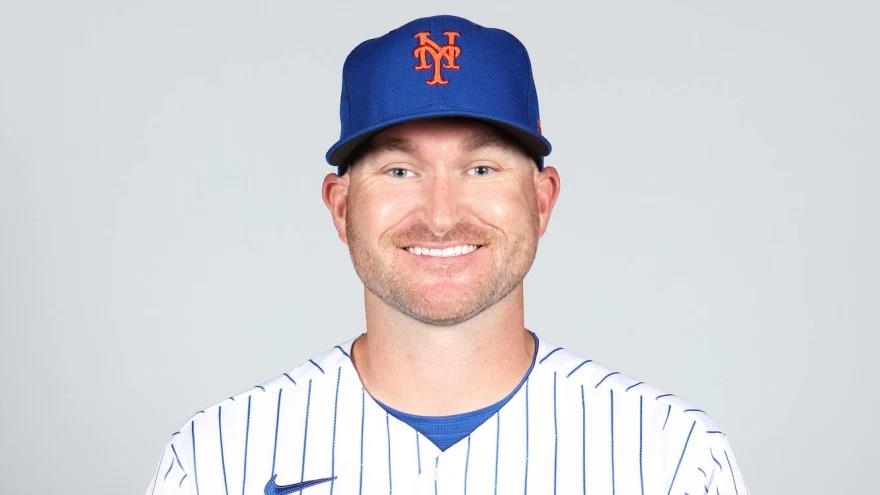 With the Giants, Meinhold will oversee operations and development of the team's pitching staffs across the organization, while doing most of his hands-on work at the KBO level. And as he is about to step into a new job in a new country, Meinhold is confident he can combine his knowledge of advanced baseball data with his interpersonal skills to bring out the best in Giants' pitchers.

"My biggest thing is I try to meet the players where they are. It might look different for every single person but my job is to connect with them," Meinhold told Yonhap News Agency in a phone interview on Tuesday. "And I think that's probably my biggest strength: to connect with people and give them what they need when they need it, instead of just trying to be the smartest guy in the room."

Meinhold does take pride in having "a really good understanding of a lot of really complex things" and in his ability to "translate that into simplest forms for the athletes."

"The fun part about this whole deal is, going to Korea, I'm going to have to translate it even further because there's a language barrier," Meinhold said. "But I think that's just another dynamic to the growth of a coach, trying to take some super complex things and making them so simple that someone who doesn't even understand your language can understand. Baseball is its own language. Not knowing any Korean going into this is a challenge in itself but it challenges me as the coach to still get to know the players for who they are and understand what makes them tick." 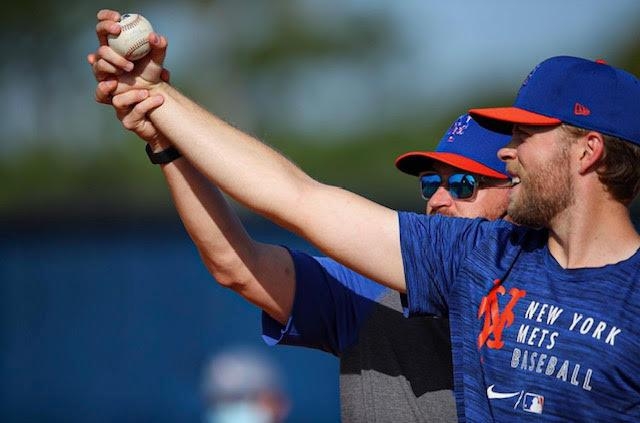 Meinhold said he has been able to develop a wide range of skills because he got to take on many different tasks early in his post-playing career.

"From coaching to scouting to analyst's work. I was fortunate to be thrown in the fire a lot and just trying to survive," he said. "That's where my best growth comes from. Through all those experiences, I was able to dip my toes into things that I didn't necessarily think I'd like or didn't think I'd be good at, or didn't think I'd be challenged by. And fortunately, I've been challenged every step of the way and it's helped my growth."

And it's Meinhold's willingness to challenge himself that will bring him to South Korea next season.

After leaving the Mets in September, Meinhold was approached by some major league teams about new opportunities. The Giants also reached out. Their general manager, Sung Min-kyu, knew Meinhold from his days as a scout for the Chicago Cubs, and the two had remained in touch after Sung took his current KBO position in the fall of 2019.

Meinhold said he interviewed for major league positions, and had an opportunity to be a pitching coordinator and a minor league pitching coach. He could have waited around for a big league coaching job.

Ultimately, Meinhold couldn't pass up a chance to be the Giants' go-to man when it comes to pitching.

"I'll be the one who sets the tone for the entire organization and I really enjoyed the thought of that," he said. "I wanted to set the foundation for growth and for consistency in development as well as winning. And after talking to (Sung) and talking to Larry (Sutton, the team's manager), I felt like I could do a lot of really good things with our group. I felt like it could be challenging and it'd be something that'd be really exciting."

Though Meinhold has never been to South Korea, he is no stranger to Korean baseball.

He scouted the KBO while with the Cardinals for a handful of years, watching video and staying in constant touch with the team's scout who traveled to South Korea. The Cardinals had South Korean closer Oh Seung-hwan from 2016 to 2017. Meinhold had a hand in the Cardinals' signing of the former KBO MVP-winning left-hander, Kim Kwang-hyun, in late 2019, though Meinhold agreed to leave the Cardinals for the Mets the same day that Kim arrived in St. Louis for the first time. 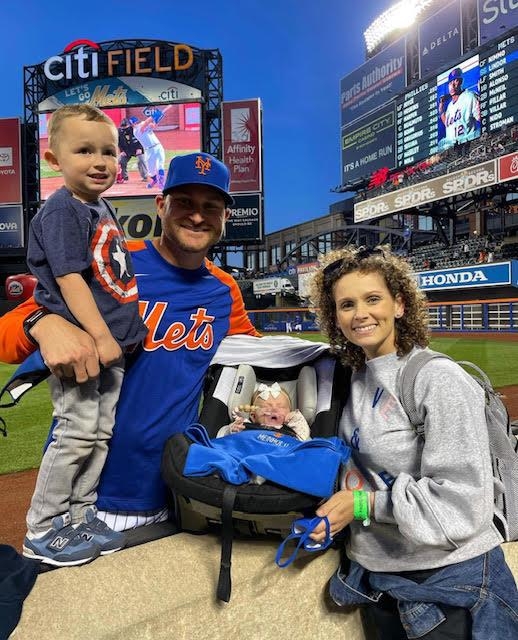 Meinhold said Matt Slater, the Cardinals' special assistant to the general manager in player procurement and Meinhold's mentor, and scout Jeff Ishii were the principal figures in the Kim signing. Meinhold called himself "just a secondary piece" in the process but he added, "I liked (Kim) for three years and I liked him for multiple reasons. I definitely gave my opinion."

With Meinhold as the pitching coach, the U.S. defeated South Korea 8-0 in the gold medal game of the 2017 U-18 Baseball World Cup. South Korea's second pitcher in that game, Seo Jun-won, is now pitching for the Giants.

Meinhold was also junior college teammates with Eric Thames, the 2015 KBO MVP with the NC Dinos, before the two transferred to different schools later. Meinhold and Thames were also rivals in high school, with Thames' team eliminating Meinhold's team in the playoffs in their senior season.

"I definitely talked to people that I've met through the game that gave me a light into what things are like (in the KBO) as a player or as a coach and as a front office member. This confirmed what I already thought or already knew about what I've experienced through others," Meinhold said. "I really enjoy the type of baseball that is played (in the KBO), the respect factor of the game, the fundamentals, as well as pushing the envelope to develop more progressive developmental thoughts and putting that into play on the field." 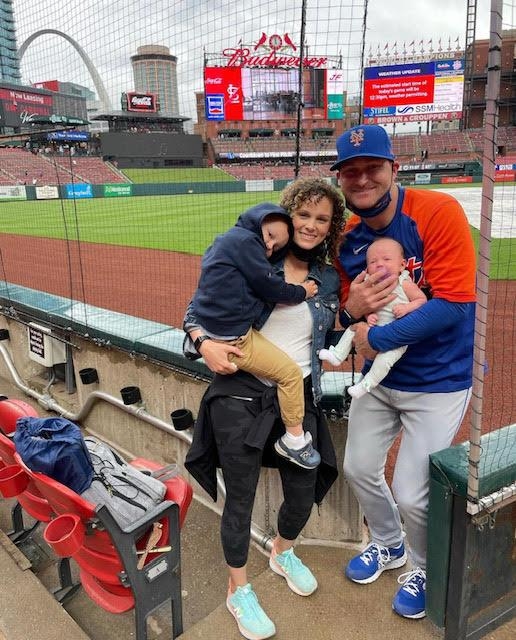 Meinhold will now have to channel his love of Korean baseball into on-field success. In 2021, the Giants posted the worst ERA among the 10 KBO clubs with 5.37. They also surrendered the most hits with 1,333, second-most walks with 659 and third-most home runs with 133.

The Giants allowed a .271/.364/.410 line, the worst numbers in the KBO. They finished seventh in the standings at 65-71-8 (wins-losses-ties) and missed the postseason for the fourth straight year.

Things won't get any easier for the Giants in 2022. KBO teams have been busy bolstering their lineups, with the Kiwoom Heroes making the biggest splash by signing the former National League All-Star outfielder, Yasiel Puig.

Meinhold said his pitchers will just have to focus on what they do best, rather than worry about who's at the plate, be it Puig or other former major league hitters. They key will be to attack opposing batters with "relentlessness and competitiveness."

"We need to understand that the buck stops with us. If we understand what we do really well and we do that on a high level, nobody's going to touch us," he said. "You respect the person in the box but at the same time, you're going right after him. So we'll do our best to exploit their weaknesses and stick to our strengths."