SEOUL, Dec. 24 (Yonhap) -- South Korean film distribution companies went through hard times this year as the local cinema industry has been still suffering from a sharp drop in attendance amid the COVID-19 pandemic.

A combined 18 films, including "A Year-End Medley" slated for Wednesday next week, has been distributed in 2021 by six major film distributors, including CJ ENM and Lotte Cultureworks.

The yearly number is nearly unchanged from some 20 homegrown movies shown in theaters last year but fell sharply from about 35 film in 2019.

Lotte Cultureworks, an entertainment unit of retail giant Lotte Group, presented three films in 2021 and received the best attendance results thanks to the box office hit "Escape from Mogadishu."

"Mogadishu," about a life-and-death escape by South and North Korean diplomats during the Somali civil war in the 1990s, is the most-watched film in 2021 with a total audience of 3.61 million. Disaster-comedy film "Sinkhole," depicting people swallowed by a massive sinkhole along with a multifamily house, was the biggest hit among films presented by Showbox in 2021. The flick garnered a total of 2.19 million people, marking the second most box office numbers after "Mogadishu."

Another Showbox 2021 title was the Thai-Korean horror film "The Medium," which drew 830,000 moviegoers in total. Industry leader CJ ENM, an entertainment and media affiliate of CJ Group, came up short in 2021.

Out of the five titles under its belt, "Seobok," "Hard Hit," "The Cursed: Dead Man's Prey," "On the Line" and "A Year-End Medley," the crime action film "On the Line" is its top slate with 1.41 million viewers.

But as part of its strategies to survive the pandemic, it adopted a new scheme for hybrid theater-and-digital releases in collaboration with its sister online streaming platform, Tving.

CJ ENM released the sci-fi actioner "Seobok" in theaters and on digital streaming at the same time, and the upcoming romantic comedy "A Year-End Medley" will follow the suit. 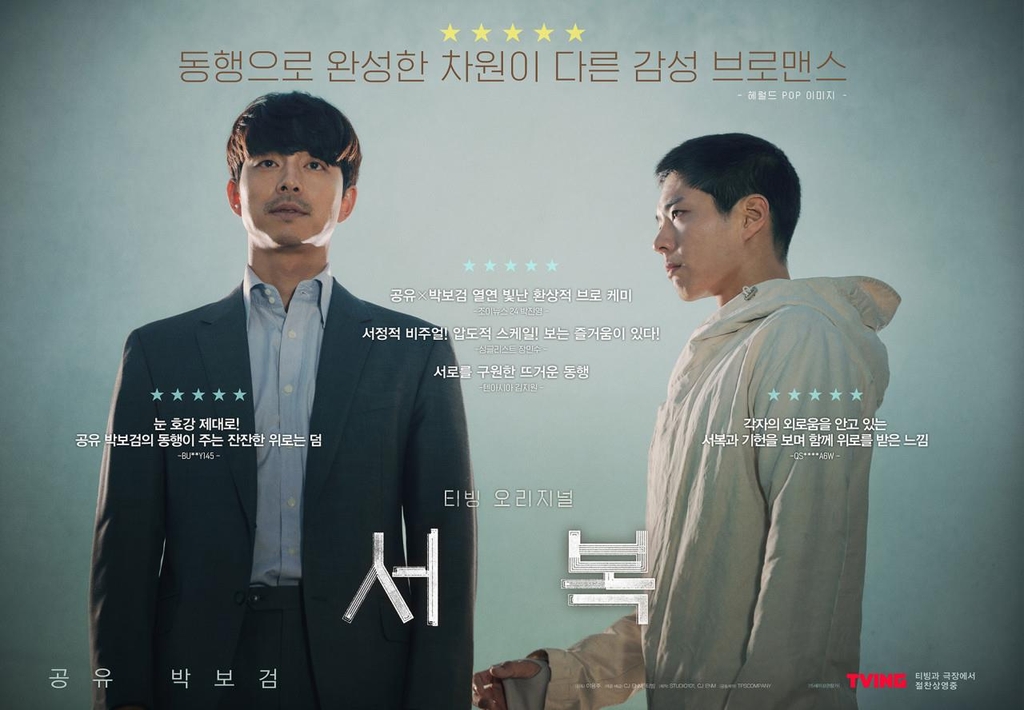 Megabox Plus M released four titles -- "The Book of Fish," "Kids Are Fine," "Pipeline" and "Spiritwalker." Among them, the action crime film "Spiritwalker" is the most-viewed film with 800,000 moviegoers.

The Next Entertainment World, or known as NEW, saw the crime film "Hostage: Missing Celebrity" attract 1.63 million people and the comedy "Perhaps Love" with 510,000.

Acemaker Movieworks, a mid-sized distributing company, came up with only one film this year, "New Year Blues," which posted 170,000 in total attendance.

The South Korean film industry was regarded as one of the biggest losers of the protracted pandemic, as it saw the total number of moviegoers in the country plunge 75 percent on-year to a record low of 59.5 million in 2020 from 226.7 million in 2019.

The downside trend continued in 2021, with a cumulative 52 million people coming to theaters over the first 11 months of the year.