SEOUL, Dec. 25 (Yonhap) -- Lee Jae-myung, the presidential candidate of the ruling Democratic Party (DP), said Saturday that he was a "pro-business" person keen on striving to make his country flourish by supporting companies.

Lee made the remarks during a talk show aired by Yonhap News TV, stressing that the widely held public image of him having an unfavorable view toward businesses is not what he is about.

"I am a pro-business person in fact, and people don't know that," he said in the show. "Those who don't communicate directly with me, or do not know me enough, suspect that I am anti-corporate, pro-labor and anti-market."

"(Companies are) the pillar of the market economy. It's very important that we provide the companies with a free environment," Lee said.

Lee explained that he wants to take a path where "companies and industries grow, jobs are created and the economy prospers, through a regulatory shift and large investment." 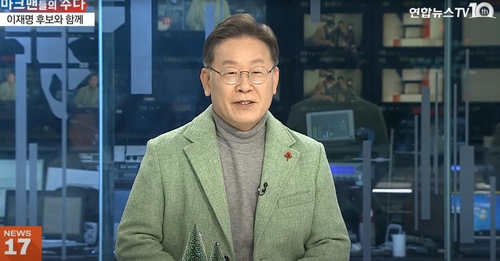 Appearing in a separate YouTube channel on economy earlier in the day, Lee said South Korean stocks are undervalued and he believes the Korea Composite Stock Price Index (KOSPI) can go up to the 5,000-point range.

Asked why he thinks local stocks are undervalued, Lee pointed to a lack of transparency in the market.

"Since the country's stock manipulation crackdown is very low and punishment is too weak ... people do not trust the market," Lee said.

Lee said the country's housing market is at its peak and soaring home prices were caused by policy mistakes.

"For example, if the market feels that home supply is insufficient, we need to take actions to increase supply, but there seems to be an aspect of denying the market's request," he said. "Suppressing prices actually can bring adverse effects."