SEOUL, Dec. 28 (Yonhap) -- "Spider-Man: No Way Home" has become the first movie to surpass 5 million in admissions since the coronavirus pandemic began in South Korea, its local distributor said Tuesday.

The latest Marvel superhero film hit the landmark at 7 a.m., on the 14th day of its release, according to Sony Pictures.

This marks the first time that a movie has collected an audience of more than 5 people since the outbreak of the COVID-19 pandemic in the country in January last year.

In 2019, five movies -- "Extreme Job," "Avengers: Endgame," "Frozen 2," "Aladdin" and "Parasite" -- surpassed the 10 million mark, a standard for a box-office success for commercial films in South Korea. But last year, the Korean historical drama "The Man Standing Next," which was released right before the COVID-19 outbreak and sold 4.75 million tickets, topped the yearly box-office chart.

Released Dec. 15, the latest installment of the Spider-Man film trilogy became the No. 1 hit movie of the year in South Korea on Saturday, beating the attendance record of the Korean film "Escape from Mogadishu," seen by 3.61 million people. 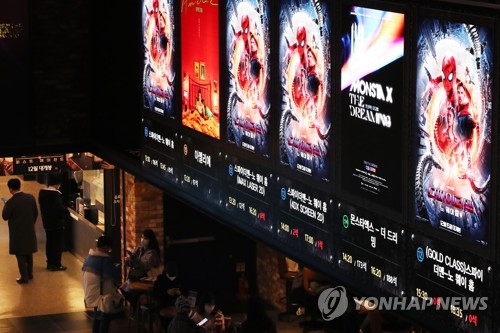