SEOUL, Dec. 28 (Yonhap) -- By putting together a strong 2021 season on the heels of an injury-plagued 2020 campaign, Hanwha Eagles' right-hander Nick Kingham proved that he could be an ace caliber pitcher when healthy.

As he is preparing for another season in the Korea Baseball Organization (KBO) with the Eagles, health remains the No. 1 priority for the 30-year-old American starter.

"I think the biggest question mark for everybody was my health, especially after 2020, missing 95 percent of the season. So just to be healthy and strong, that was my main goal (for 2021)," Kingham told Yonhap News Agency in a recent phone interview from his offseason home in Las Vegas.

"I'm super excited and looking forward to 2022, knowing that now I'm healthy going into a regular offseason, I'm not rehabbing, and I'm not coming off surgery. Health is key, and you can't do anything without health. So that's the most important thing going forward," he said. 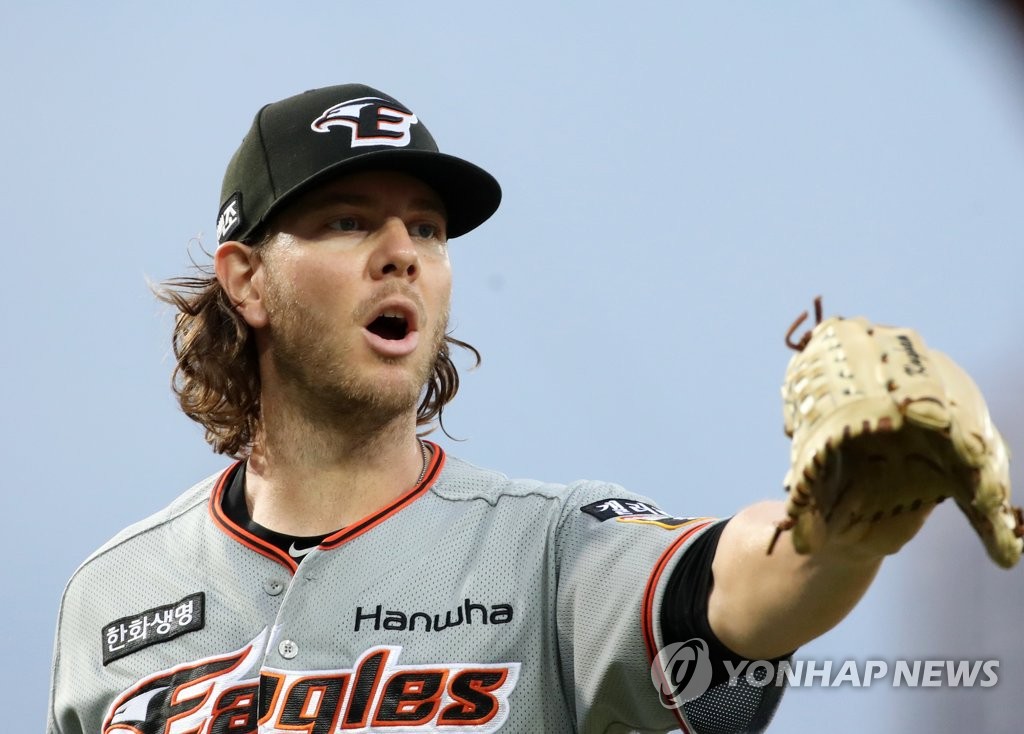 Kingham, a fourth-round pick by the Pittsburgh Pirates at the 2010 major league draft, first arrived in the KBO prior to the 2020 season by signing with the SK Wyverns (now SSG Landers). Kingham was the club's Opening Day starter but made only one more start before undergoing season-ending elbow surgery.

Asked about lessons learned during his rehab, Kingham said he should have been more forthright about his physical condition instead of trying to pitch through pain.

"As soon as I felt something, I should have said something early on. I think I'd made things worse by pitching through those spring camp games," Kingham recalled. "I felt the pressure of being named the ace of the team. Just be honest with yourself: I think that's what I learned more than anything. You're nothing without your health. When I'm healthy, I help the team more than anything, so that's the best thing I can do."

As Kingham was rehabbing, the Eagles took a chance on him, believing that he would be back to his pre-surgery form.

And the Eagles' faith was rewarded. In 2021, Kingham went 10-8 with a 3.19 ERA in 25 starts, despite pitching on the last-place club that won just 49 games. Opponents had an on-base plus slugging percentage of just .599 against Kingham, tied for the second-lowest mark in the KBO. Kingham allowed 7.31 hits per nine innings and an opponents' batting average of .219, both of them third-lowest in the KBO.

Kingham and his wife had reached such a comfort level in South Korea that it didn't take long for him to realize he wanted to stay in the KBO for at least another season. The feeling was mutual for the Eagles, who announced on Dec. 10 that they will bring Kingham back on a new one-year deal at US$900,000. Kingham earned $550,000 this year. 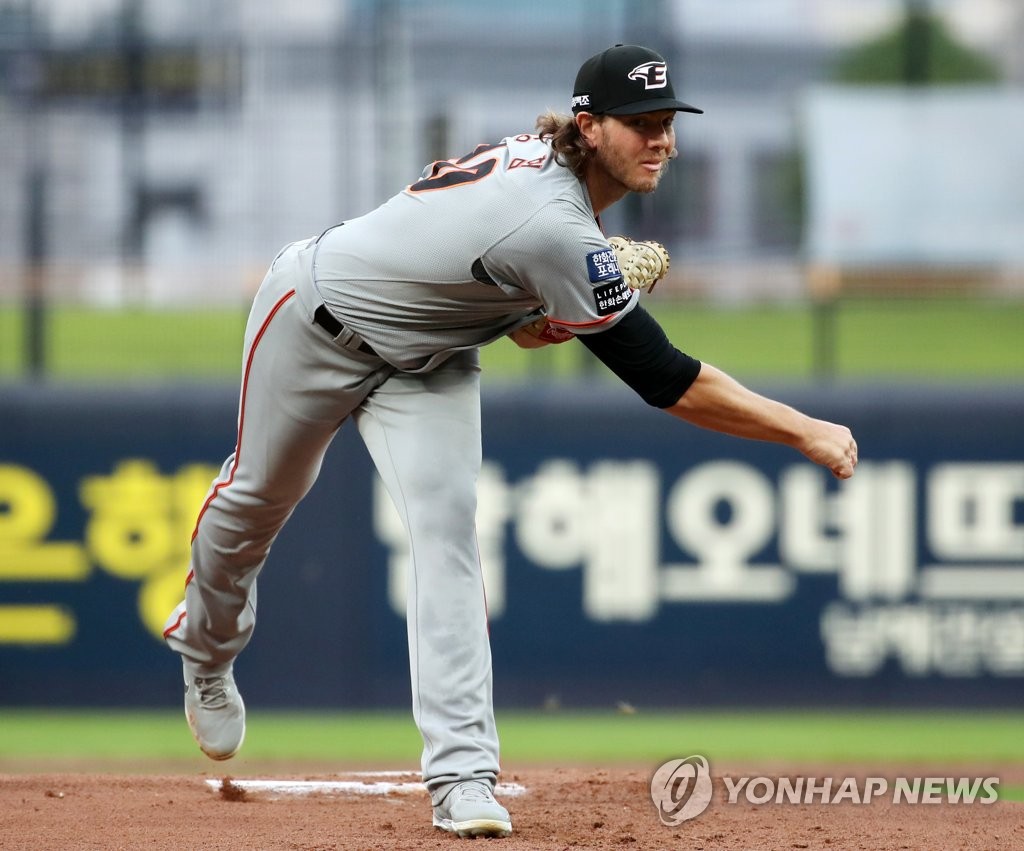 Kingham's numbers could have been better had he pitched the whole season. He was sidelined for about a month, starting in late May, with a lat injury, a condition that Kingham attributed to overextending himself over the winter. He didn't take much of a break after his surgery, as he had to rehab and went right back to throwing in the bullpen as showcases for teams interested in his service. The Eagles were among them.

"I was ready to go game-ready in November, and I think I kind of just tired out (during the season)," Kingham said. "That's what led to that little minor tweak on my lat. So I think rest this offseason was going to be crucial for me to really get a good reset and be ready to go for 2022."

But that 2022 season could be another long one for the Eagles, who have been seemingly in a perpetual rebuild.

They finished at the bottom of the league in each of the past two seasons and second from last in 2019. Their most recent trip to the postseason came in 2018, and that was their first playoff appearance since 2007.

Kingham admitted it's "not fun losing" but added losses aren't due to any lack of effort on his team's part.

"We're out there grinding every game, and we show up to the ballpark expecting to win," he said. "We know that our pitching is good, and we have a great offense. It's just about timely hits and putting things together and stringing together good hits and manufacturing runs." 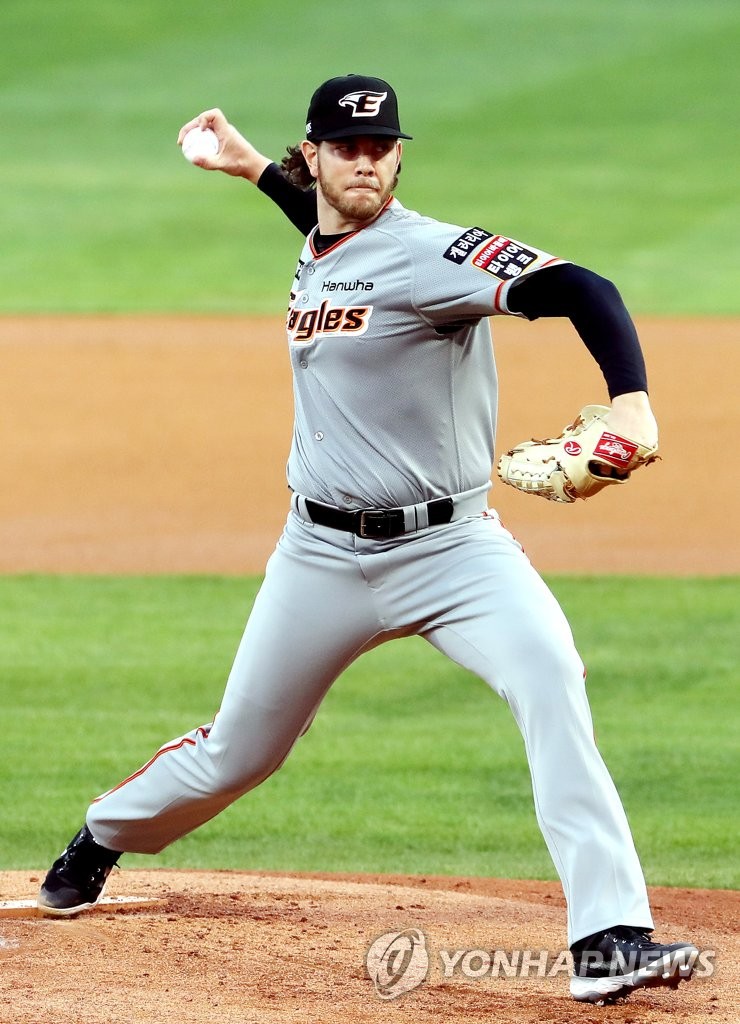 Kingham also believes there will be light at the end of the tunnel.

"I know that we're rebuilding, but it's an honor, honestly, to be part of this and to be at the foundation of where the Hanwha Eagles are heading," he said. "As soon as we start tasting wins and start tasting success, I think it will lead to more wins."

To help the Eagles post more W's on the board, Kingham, on top of staying healthy, wants to become more consistent.

As well as he pitched in 2021, Kingham had some ups and downs. He would pitch well for three or four starts and then get knocked around and give up crooked numbers.

For example, he opened September with two excellent outings, allowing no earned runs in six innings and striking out 10 and then giving up just one run in seven frames with 10 strikeouts again. But in his third outing of September, Kingham surrendered four earned runs in seven innings. He bounced back with two straight starts of one-run ball but closed September by giving up four runs in five innings.

"I had some good games in a row but then I'd have one or two poor games. I think I'm trying to eliminate those," Kingham said. "I want to go as deep as I can and go five, six or seven innings, giving my team the best position to win the ballgame when I exit the game."