SEOUL, Jan. 3 (Yonhap) -- The upcoming expansion of South Korea's vaccine pass requirement to big box and department stores is inflaming protests that the measure represents discrimination against unvaccinated people and a breach of their right to basic needs.

Under a revised vaccine pass scheme announced Friday, people will be required to present proof of vaccination or a negative COVID-19 test result to shop at discount or department stores measuring 3,000 square meters or more, starting Jan. 10.

The fresh addition of those stores to a host of multiuse facilities subject to the vaccine pass regime, including cafes, gyms and cultural facilities, came as the government is struggling to rein in the upsurge of virus cases and the omicron variant.

The updated regulation will leave big box and department stores inaccessible to shoppers without a vaccine pass, even to those who shop alone. 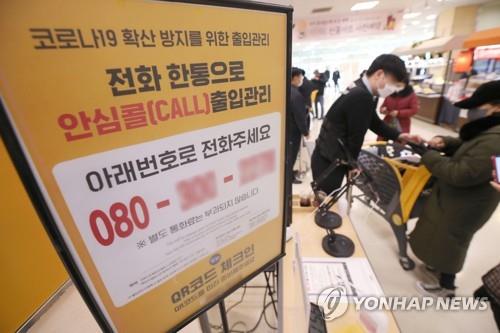 An outburst of online protests followed the decision, decrying what critics said amounts to infringement of basic rights, incrimination of the unvaccinated and coercion to get vaccinated.

Opponents argue that barring a lone unvaccinated shopper with a mask on from big grocery stores is unfair, because an unvaccinated person is allowed to eat alone at a restaurant with a mask off under the current distancing rules.

"It's getting more difficult to buy essential goods and conduct social activities, and I am being suffocated with the latest atmosphere, where unvaccinated people are being treated as those who fail to abide by their social duties," an internet user, nicknamed "too sick," wrote on an anonymous online bulletin board Monday.

"Now, people who are too sick or afraid of getting vaccinated are going to be excluded from social life?" the internet user questioned.

Another netizen denounced the decision as stigmatizing and discriminating against the unvaccinated, claiming a pileup of breakthrough infection cases proved vaccines are not perfect protection against COVID-19.

"Some people may be able to get by through delivery services, but how will elderly people or residents of a small town cope? ... How can the government cut off a channel of life's necessities?" the person said indignantly.

"The situation is feared to amount to discrimination and severe restrictions on people's everyday life, which could breach basic rights," Seo Chae-wan, a lawyer at a civic group named "COVID-19 Human Rights Response Network," said.

"Despite some clearly positive effects of vaccines, not everyone is equally in a condition to receive it, some due to health reasons," he pointed out.

Amid such growing grievances over the vaccine pass regime, a group of 1,023 doctors, religious people and ordinary citizens have filed a joint lawsuit seeking to nullify the system.

"The government is practically compelling COVID-19 vaccination through severe restrictions on the use of general social facilities by unvaccinated people, such as restaurants, cafes and private education institutions," the plaintiffs said in the suit filed Friday against the health minister, the mayor of Seoul and the head of the disease prevention administration.

The government is currently striving to bring a resurgent coronavirus under control after daily new cases shot up to an all-time record of 7,848 on Dec. 15.

Announcing the extension of tight social distancing curbs for two more weeks through mid-January last week, including a four person cap on social gatherings nationwide and a 9 p.m. curfew on cafes and restaurants, the government also limited the validity of vaccination to six months.

Under the new rule starting Monday, those who were vaccinated six months and two weeks ago or before are required to receive a booster shot to qualify for a new vaccine pass.

As of Sunday, the vaccine passes of some 5.63 million people were to expire under the revised scheme. Vaccine passes for nearly 5.2 million of them have been or will be renewed upon their third shot received or reserved so far, leaving the rest unqualified for renewal. 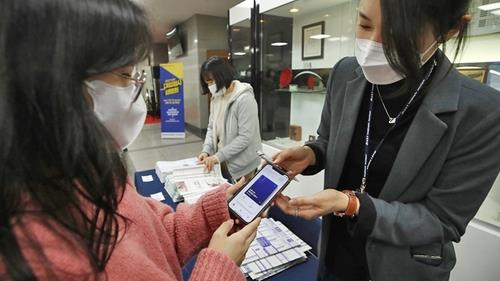