SEOUL, Jan. 10 (Yonhap) -- A Cold War-era slogan calling for "annihilating communism" has sprung back to life in South Korea's presidential race after a business tycoon used the expression to criticize China and North Korea and conservatives turned it into a meme.

Shinsegae Group Vice Chairman Chung Yong-jin prompted the creation of the meme last week when Instagram deleted one of his posts captioned with the anti-communist slogan, "myeolgong," for violating its policy on violence and instigation.

In a follow-up post, Chung used the slogan as a hashtag next to a screenshot of an article criticizing China for its overbearing attitude and the government of South Korea for failing to protest Beijing's disrespectful actions. 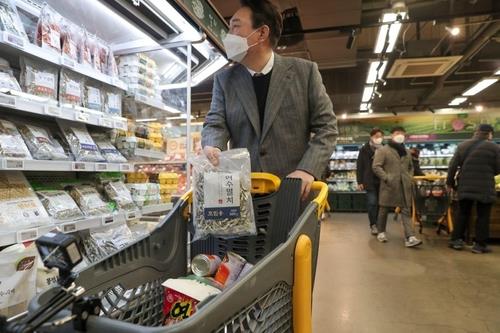 Chung later deleted the post and replaced it with a screenshot of an article featuring a photo of North Korean leader Kim Jong-un.

"My myeolgong has nothing to do with China," he wrote in the caption. "My myeolgong is solely directed at the kids living north of us."

The issue spilled into the political sphere when Yoon Suk-yeol, the presidential nominee of the conservative main opposition People Power Party (PPP), shared photos of himself grocery shopping Saturday. The Instagram post was captioned with the hashtags "E-Mart," "egg," "scallion," "anchovy," "bean" and "Yoon Suk-yeol."

Political watchers seized on the symbolism, claiming the first syllable of the Korean word for anchovy, "myeolchi," combined with the word for bean, "kong," spelled "myeolkong" -- a reference to "myeolgong," the anti-communist slogan.

Yoon's shopping at an E-Mart store was also seen as a sign of support for Chung as the supermarket chain is owned by Chung's Shinsegae Group.

The ruling Democratic Party (DP) bristled at the political messaging behind Chung's and Yoon's posts, saying the PPP candidate revealed his subservience to big business and an anachronistic mindset from the 1970s and 80s.

"This is no different from a sophisticated signal (?) to not worry because he isn't interested in people's livelihoods, the virus or relations with China but will become a puppet of capital," DP Rep. Min Hyung-bae wrote on Facebook on Sunday.

"How about you ask Chung Yong-jin to head your campaign committee at this opportunity?" he said.

Park Young-sun, a senior DP campaign member, also criticized Yoon for shopping at a giant supermarket chain at a time when small businesses are suffering under the strain of the pandemic. 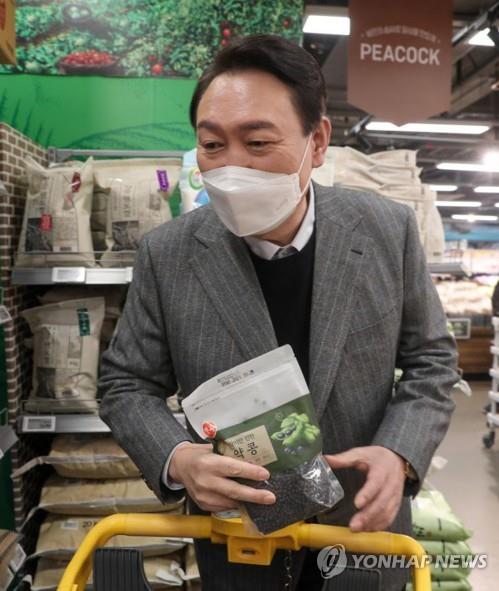 But conservatives, who have long painted the liberal ruling bloc as commies seeking to join forces with communist North Korea, were encouraged by Yoon's post. The PPP came to Yoon's defense.

Na Kyung-won, a former party leader, shared photos of herself shopping at E-Mart and buying anchovies and beans among other foods.

Choe Jae-hyeong, a former state auditor who competed with Yoon in the primaries, also joined the relay with a video of himself having breakfast that consisted of stir-fried anchovies, beans seasoned in soy sauce and an omelet.

The omelet was likely a reference to the eggs and scallions Yoon purchased, because in Korean, the words for the two foods are "dalgyal" and "pa," which when combined can suggest the term used to describe President Moon Jae-in's staunch supporters.

Yoon initially brushed off the controversy.

"It's close to my home and for once, I didn't have to be anywhere this morning," he said Saturday when asked by reporters about his trip to E-Mart. "My dogs were out of snacks and I also wanted to buy some instant noodles and other stuff, so I went some place nearby."

By Monday, however, he appeared to have a more measured response.

"Everyone has the freedom to express themselves as long as it is within the scope of not violating the constitutional order of a free democracy," he told reporters after an event in Incheon, 40 kilometers west of Seoul.

"Because it is guaranteed as a freedom of expression, I think the question of whether that is properly defended or not becomes the basis for determining whether this country is a country based on freedom and democracy."