The blockbuster listing, set for Jan. 27, will mark the biggest ever market debut by a company in the country, more than double the value of Samsung Life Insurance Co.'s 2010 IPO of 4.89 trillion won, the largest to date.

LGES has offered 34 million new shares and 8.5 million of its existing shares, held by its parent firm, LG Chem Ltd., for the IPO.

In the two-day book building conducted earlier this week, institutional investors placed bids worth 15.2 quadrillion won, LGES said in a press release. According to Friday's filing, the competition ratio for the book building was 2,023.37 to 1.

Of the collected bids, 77.4 percent of the investors agreed to a lock-up, which bans them from selling off the allotted shares for up to six months after the IPO.

LGES said its joint venture with General Motors Co. operates a plant in Michigan and is building two others in Ohio and Tennessee. Its European plant is based in the Polish city of Wroclaw.

The battery maker also has partnered up with global carmaker Stellantis N.V. to build a battery plant in North America.

LGES CEO Kwon Young-soo said in a press conference this week his company could overtake CATL in the global market share, citing strength in intellectual properties and diversity in the foreign client pool.

LGES, whose key clients include Volkswagen, Tesla and Hyundai Motor, has a cumulative order backlog worth about 260 trillion won, the company said. 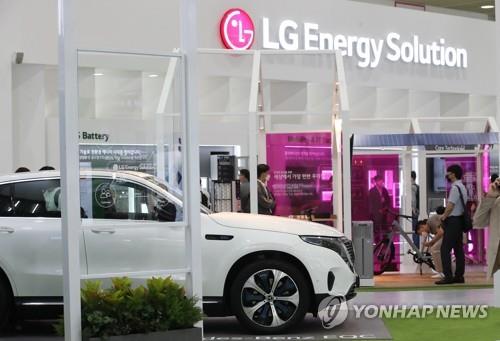