DUBAI, Jan. 16 (Yonhap) -- South Korea will speed up cooperation with the United Arab Emirates (UAE) in key eco-friendly technologies for the hydrogen economy, President Moon Jae-in said Sunday, as Seoul seeks to expand the horizons of energy cooperation with the Persian Gulf nation.

Moon, who is in Dubai for a three-day visit as part of his weeklong trip to the Middle East, made the remarks at a business forum attended by Suhail bin Mohammed Al Mazrouei, the nation's minister of energy and infrastructure, and other senior UAE officials.

Since Korea won a US$20 billion contract in 2009 to construct four nuclear reactors in Barakah, UAE, the two nations have been seeking to expand cooperation in other sectors.

"Korea and the UAE have made many achievements throughout deeper cooperation in traditional energy sectors, including oil and nuclear power plants," Moon told the forum.

Korea and the UAE will "expand energy cooperation into the hydrogen sector, a core energy resource in the age of carbon neutrality," Moon said. 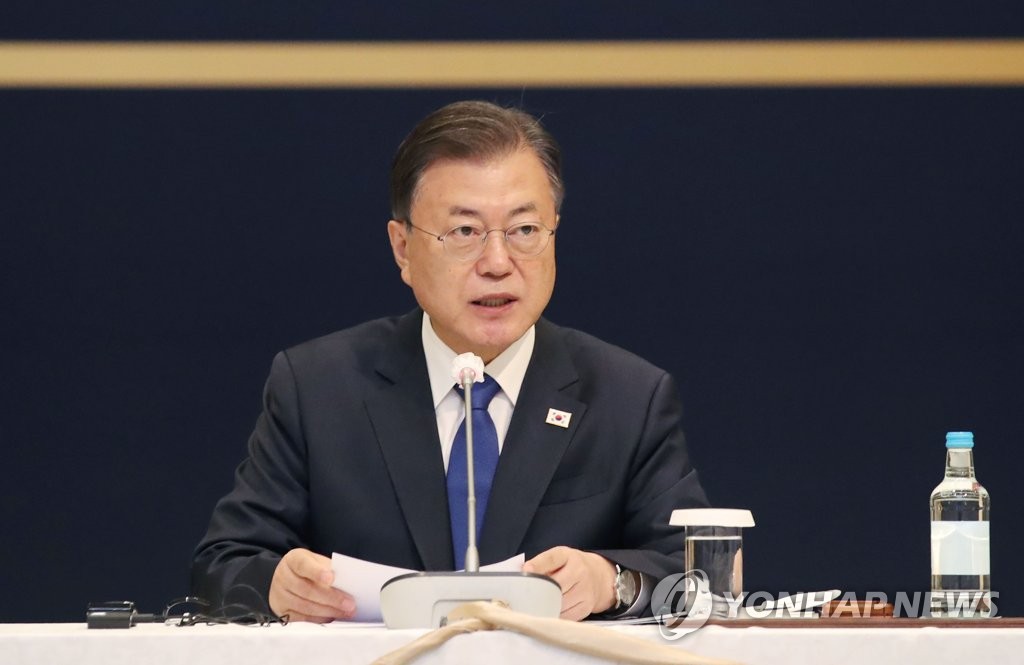 The resource-rich UAE has the potential to produce a so-called blue hydrogen, which is derived from natural gas, Moon said, adding that Korea boasts technological prowess in hydrogen-powered cars, hydrogen fueling stations and fuel cells.

If Korea and the UAE jointly bolster investment and supply chains in the hydrogen sector, Moon said the two nations will further grow together.

Since 2019, Korea has been building a hydrogen-powered public transportation system in the UAE, Moon said.

Hydrogen is an environmentally friendly alternative to fossil fuels as automobiles running on the resource only create water in the process of generating power. Hydrogen can be produced as a by-product of industrial facilities, including petrochemical plants as well.

Also on Sunday, Moon plans to pay a visit to a "Day of Korea" ceremony at the Expo 2020 Dubai and hold a meeting with the country's Prime Minister Sheikh Mohammed bin Rashid Al Maktoum.

During the talks, Moon and the UAE prime minister plan to discuss ways to expand cooperation in infrastructure, efforts to tackle climate change and space. The two leaders will also discuss Korea's bid to host the 2030 Expo.

In Dubai, Moon will step up South Korea's campaign to host the Expo in the nation's southeastern port city of Busan in 2030.