The Joint Chiefs of Staff (JCS) said that it detected the projectiles fired from the Sunan airport in the capital in the morning, in a text message sent to reporters. It did not elaborate further.

"Currently, our military is tracking and monitoring related (North Korean) movements and maintaining a readiness posture," the JCS said.

The latest launch came just three days after the North launched two suspected short-range ballistic missiles into the East Sea that it later claimed to be guided missiles fired by a railway-borne regiment during a firing drill.

Monday's firing from Pyongyang appears to underscore the North's evolving capabilities to launch missiles from various platforms, including trains, subsurface assets as well as land-based facilities.

Last week, the North warned of a "stronger and certain reaction" to the United States' recent imposition of fresh sanctions on six North Koreans involved in the regime's weapons of mass destruction and ballistic missile programs.

The North also test-fired its self-proclaimed hypersonic missile on Jan. 5 and on Tuesday last week, ratcheting up tensions amid an impasse in nuclear negotiations with the U.S. 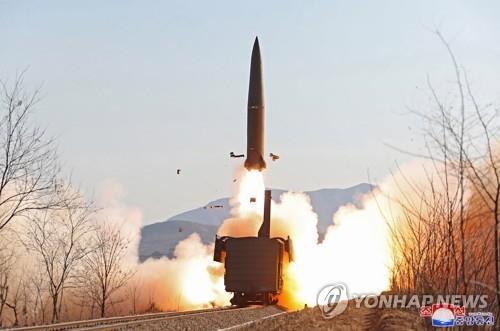