CAIRO, Jan. 20 (Yonhap) -- South Korea and Egypt on Thursday agreed to conduct a joint feasibility study on a bilateral free trade agreement, taking the first step towards a deal as Seoul and Cairo seek to deepen economic cooperation.

An FTA with Egypt, if realized, would mark South Korea's first free trade pact with an African country.

Bilateral trade between Korea and Egypt has been on the rise in recent years and stood at US$2.3 billion last year. South Korea's accumulated investment into Egypt reached $730 million at the end of last year.

Moon and the Egyptian president also signed a memorandum of understanding that calls for Seoul to provide a soft loan worth $1 billion to Egypt over the next five years.

The loan is expected to fund construction and infrastructure projects in Egypt, including upgrading railway networks and building desalination plants, according to Korean officials.

Besides, the two leaders agreed to expand the scope of existing cooperation in space, defense, cultural and people-to-people exchanges, according to the statement. 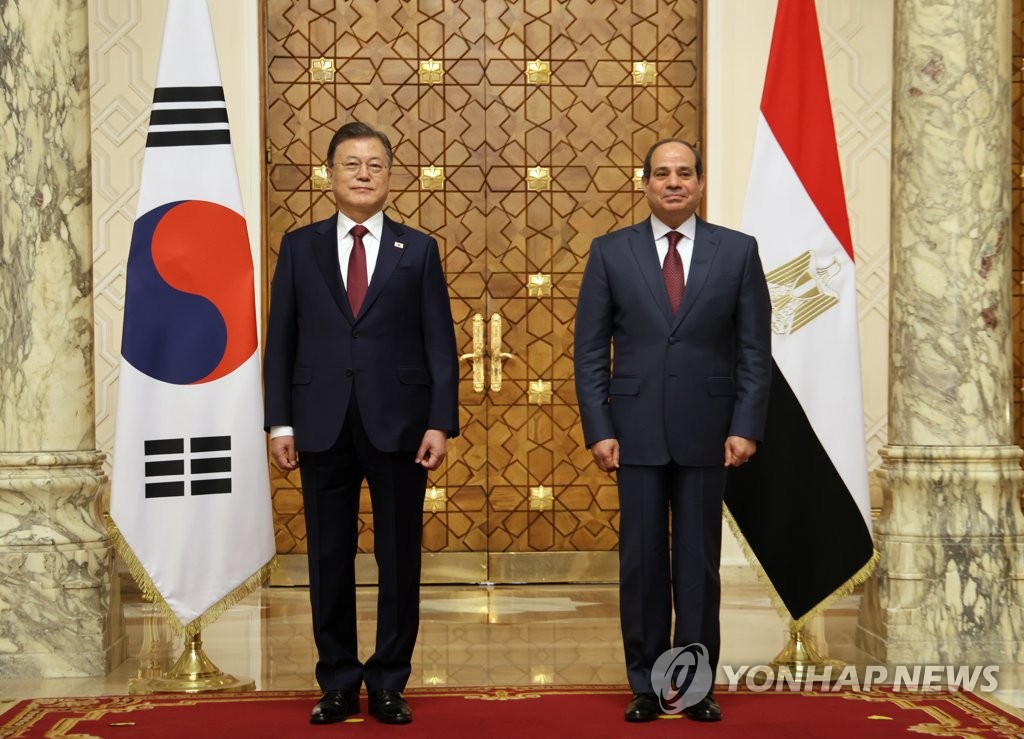 Moon also asked Egypt to support South Korea's bid to host the World Expo in the nation's southeastern port city of Busan in 2030.

Moon's visit to Cairo marked the first trip by a South Korean president to the African nation in 16 years.

Later in the day, Moon will attend a business forum where companies of the two nations plan to discuss how to strengthen cooperation in electric cars, information technology and transportation.

Egypt is the final leg of Moon's three-nation trip to the Middle East that took him to the United Arab Emirates and Saudi Arabia.

Meanwhile, Moon told an Arabic newspaper that South Korea and Egypt could enjoy mutual benefits if they sign a free trade deal.