SEOUL, Jan. 25 (Yonhap) -- South Korean stocks tumbled to an almost 14-month low Tuesday as investors are bracing for hawkish comments from the U.S. Federal Reserve. The Korean won fell against the U.S. dollar.

Trading volume was moderate at about 630 million shares worth some 11.5 trillion won (US$9.6 billion), with losers outnumbering gainers 862 to 55. 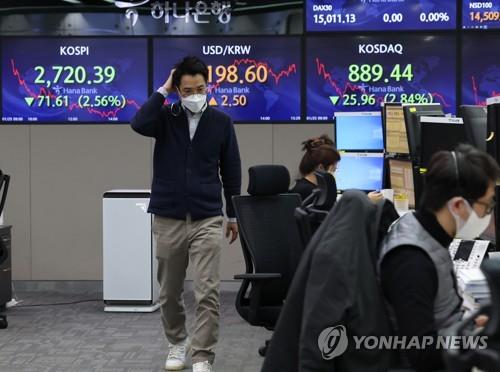 Stocks extended their losing streak to a third session, largely as investors are worried that the U.S. central bank may hint at more hawkish policies than the market consensus.

It marked the first time that the daily caseload has surpassed the 8,000 mark since the country reported the first COVID-19 infection on Jan. 20, 2020.

Most large caps closed down in Seoul.

Bond prices, which move inversely to yields, closed lower. The yield on three-year Treasurys added 6.2 basis points to 2.174 percent, and the return on the benchmark five-year government bond rose 5.7 basis points to 2.393 percent.