SEOUL, March 28 (Yonhap) -- After his experiment with a new, sidearm delivery went awry last year, Tyler Eppler wanted to go back to being the pitcher he had been in the past, someone who could throw strikes consistently and limit hard contact.

The Kiwoom Heroes of the Korea Baseball Organization (KBO) were convinced Eppler's subpar 2021 season with the Washington Nationals' Triple-A affiliate, Rochester Red Wings, had been an aberration, and they were willing to give the right-hander that chance. About to turn 29 with eight professional seasons in the rearview mirror, the right-hander took his leap and signed with the Heroes in December.

Eppler is now ready for a fresh start. 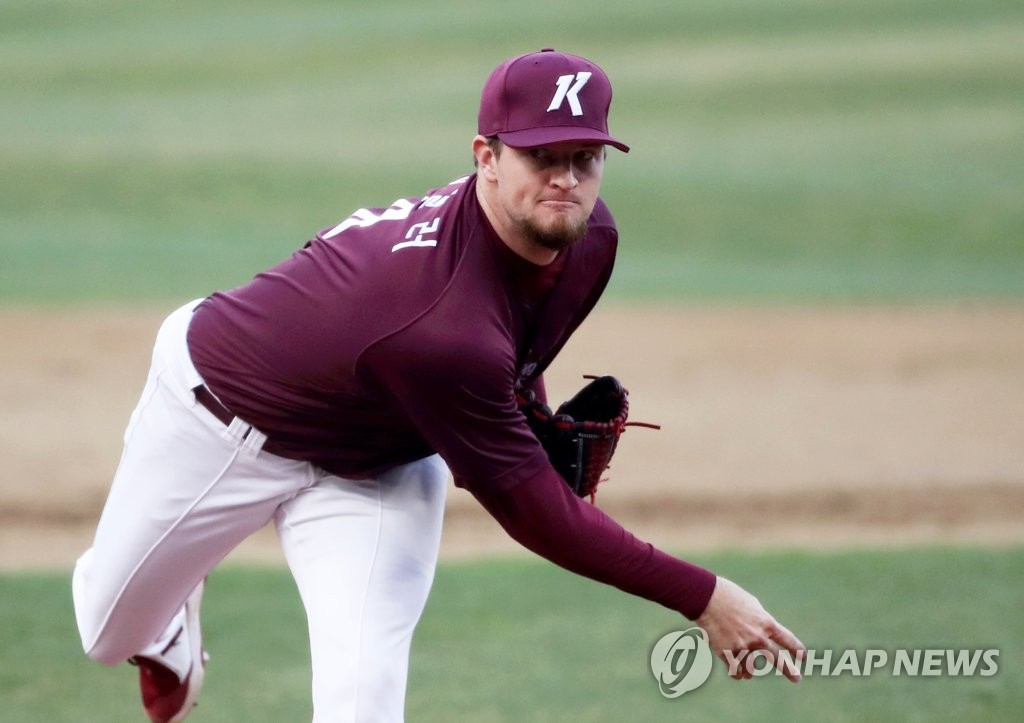 "I wanted to work on getting back to the pitcher that I was before without throwing sidearm, so that was my focus this offseason," Eppler said in a recent phone interview with Yonhap News Agency. "I'm looking forward to the season a lot, trying to get back to the pitcher I am. I know that I can be, and (I am) feeling really good with everything right now. And I've had some early success here in spring, so we're just looking to build off that and trying to get better each and every day.

Eppler discussed how the Nationals wanted him to change his mechanics during last year's spring training and got him to start throwing sidearm, instead of over the top, as he had done all his career. 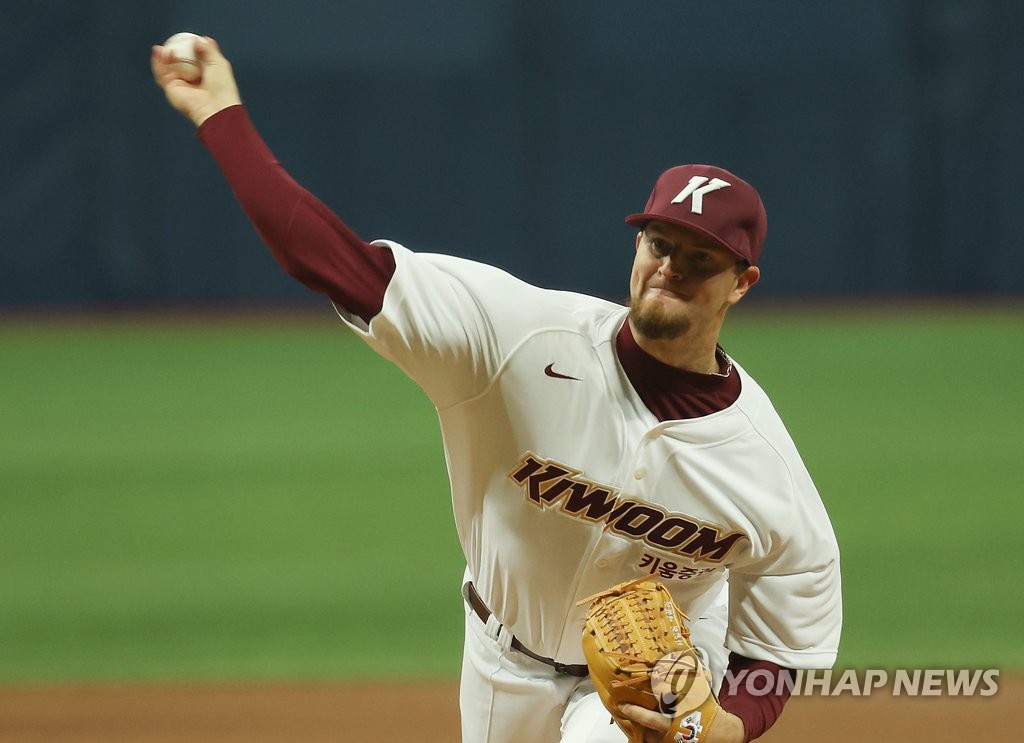 Eppler, a sixth-round choice by the Pittsburgh Pirates at the 2014 draft, ended up posting his worst Triple-A numbers, going 2-9 with a 7.75 ERA in 19 appearances, including 15 starts, over 72 innings. He walked 3.8 batters per nine innings, by far his worst rate, and the Nationals released him late in the season.

Eppler went to the Dominican Winter League to finish out 2021, and that is where he met with the Heroes' general manager Ko Hyung-wook and baseball operations director Phil Huh.

"Phil had seen me in the past couple of seasons, and he basically told me, 'I've seen you throw over the top before and that's who we're interested in,'" Eppler said. "So I told him that was my goal, to get back to being that guy. And so it worked out well." 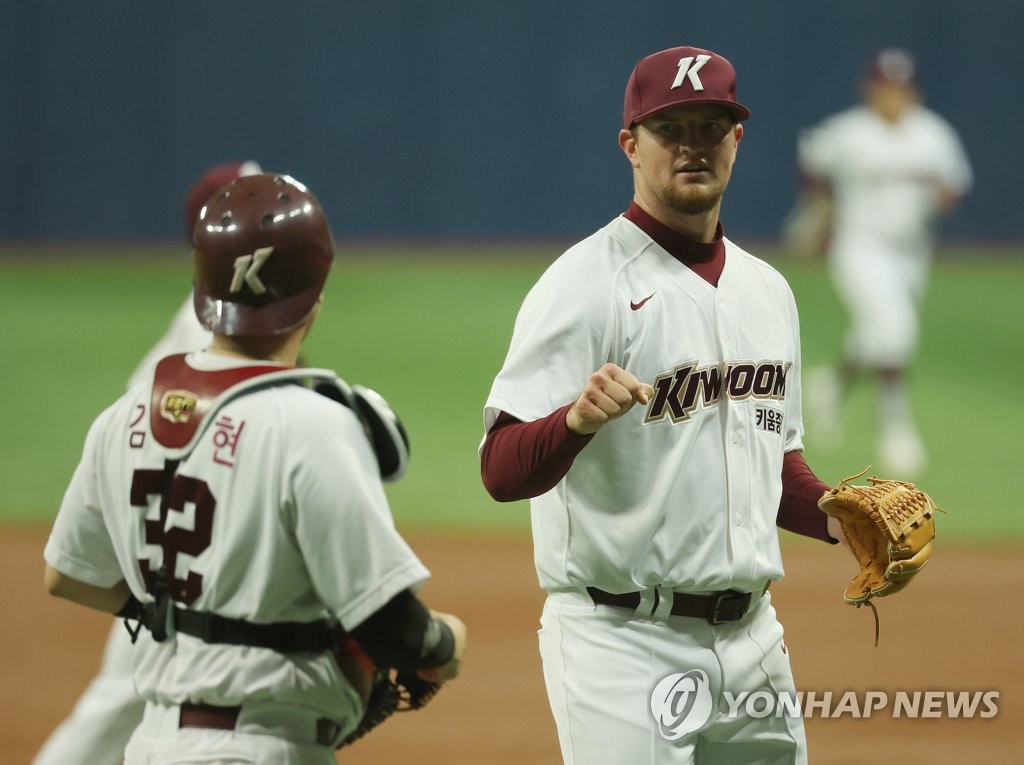 As recently as 2018, Eppler had finished second in the Triple-A International League with 13 wins while posting a solid 3.59 ERA for the Indianapolis Indians. He also finished among the top 10 in innings pitched and strikeouts.

But Eppler never reached the majors before coming to the KBO, going up only as high as Triple A in 2017 and 2018 for the Pirates, and again last year for the Nationals.

Eppler had his first foray into Asia in 2019 with the Orix Buffaloes in the Nippon Professional Baseball (NPB) in Japan, where he went 4-4 with a 4.02 ERA in 24 games.

Eppler went off to a strong start to his first preseason here, combining for five shutout innings over his two initial starts while striking out four and walking none. He was roughed up in his most recent outing last Thursday, as he served up two home runs against the Kia Tigers in four innings while allowing six earned runs. 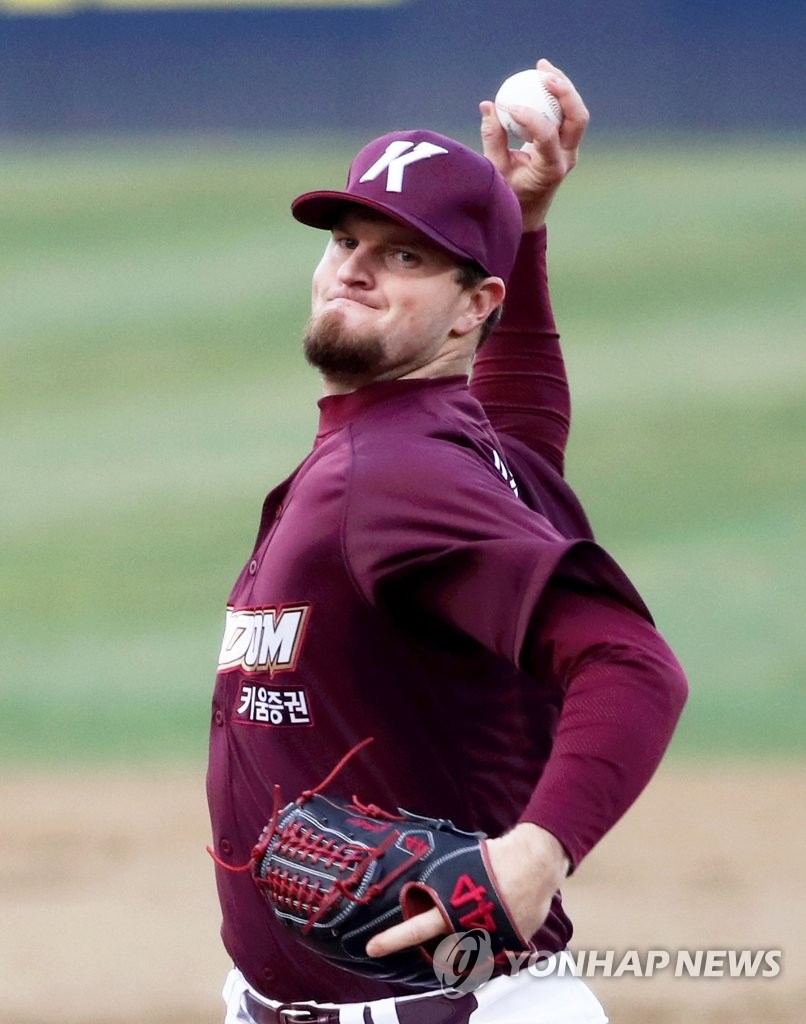 Though there are differences between South Korea and Japan, having already spent time in this part of the world has helped make the transition to South Korea easier for Eppler. Having also played in the Dominican Republic, Eppler said he has always enjoyed the traveling aspect of his career. He has already thrown himself into Korean culture and picked up enough of the language to be able to read players' names off the scoreboard.

"Just going on to see the way people live in different cultures other than America, coming here to Korea and just seeing all the differences is so cool," he said. "It's a really cool thing to travel and see the world, and to get to play baseball while you're doing it makes it even better."

In terms of baseball, Eppler feels KBO hitters stand somewhere between hitters in the U.S. and Japan.

"In Japan, there were a few power hitters, but for the most part, those guys are just trying to put the ball in play," Eppler said. "Guys here are going to do some damage if you make a bad pitch. So (there are) some really good hitters already, and we haven't played everyone yet. So it's been fun to watch and trying to learn as much as I can to figure out who's who and who are the guys to watch out for." 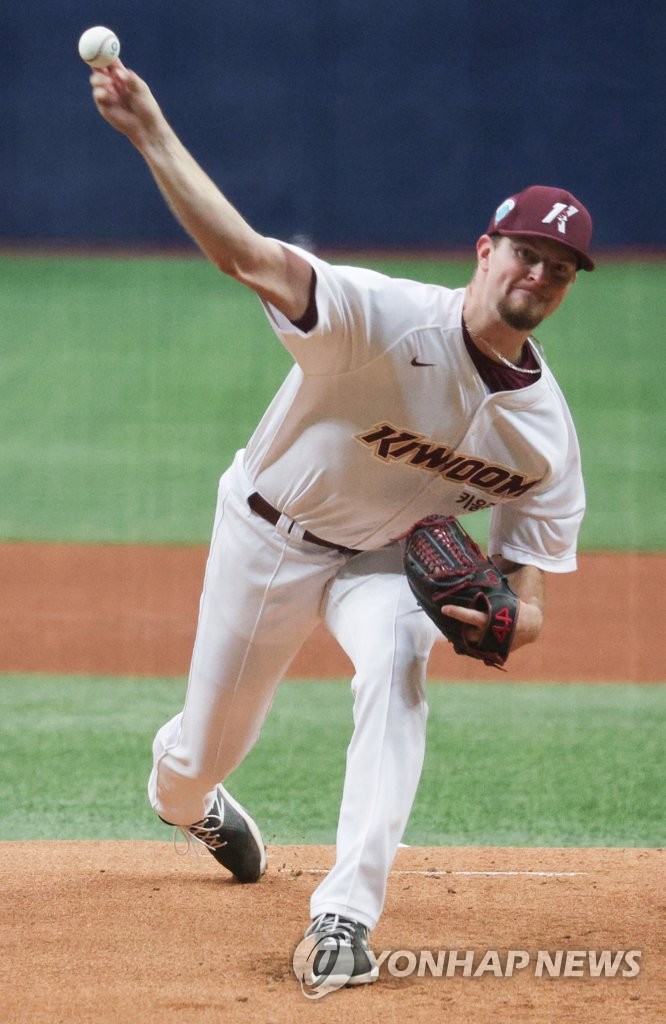 Eppler will attack hitters with a wide repertoire. Earlier in his minor league career, lacking a traditional slider, he started throwing a hybrid pitch that was a cross between a cutter and a slider. He was searching for something that would complement his fastball, curveball and changeup.

Eppler has also received a great deal of help from his friends in the game who have been in the KBO ahead of him. Eppler was teammates with the current Hanwha Eagles starter Nick Kingham for three straight seasons in the minors, starting in 2016. In 2017, Eppler was also joined by Josh Lindblom, who'd pitched in the KBO from 2015 to 2016 and then spent an early part of 2017 in Triple-A for the Pirates before returning to South Korea. 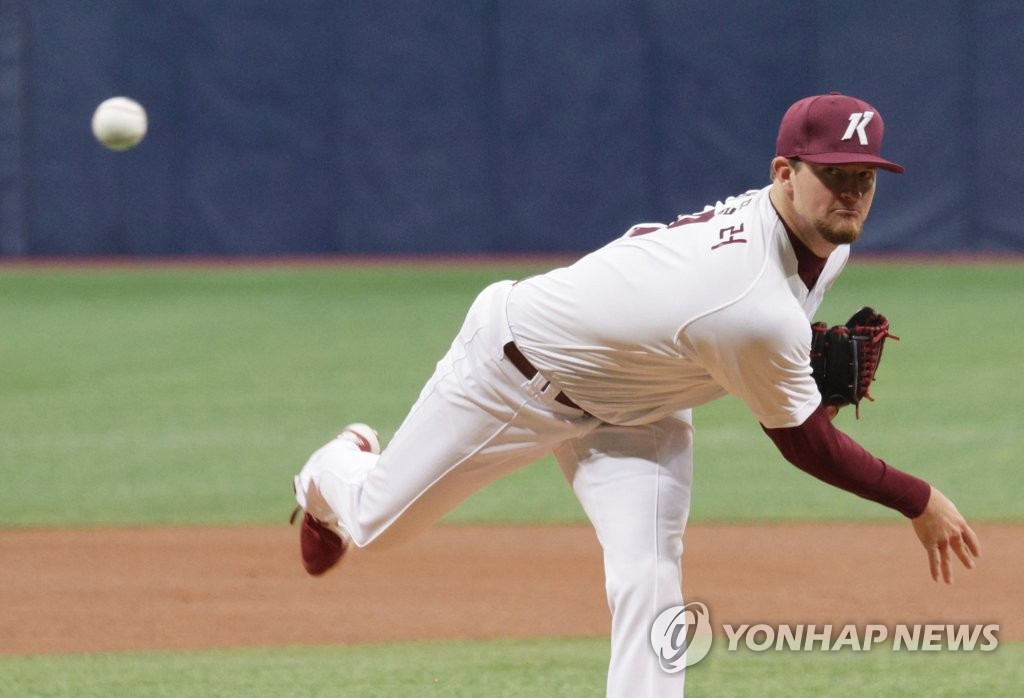 Eric Jokisch, Eppler's rotation mate entering his fourth season here, has been the biggest help. That Jokisch has been among the most successful starters since arriving here in 2019 -- he won the ERA title in 2020 and was tied for the league lead in wins in 2021 -- doesn't hurt, either.

"He's probably getting tired of me talking to him so much," Eppler said with a laugh. "I've asked him lots of questions in the dugout during games, just trying to learn different hitters here in the KBO and how to be successful."

Eppler could potentially be reunited with another former Triple-A teammate, and a rather controversial one at that, in infielder Kang Jung-ho.

Kang played for the Heroes franchise from 2006 to 2014, before signing with the Pirates in 2015. The hard-hitting infielder played nine games for the Triple-A Indians in 2018, as he was trying to get his once-burgeoning big league career back on track following some legal trouble.

Kang, who finished third in the 2015 National League Rookie of the Year voting, crashed into a guardrail in Seoul while driving under the influence of alcohol in December 2016. It was later revealed to be his third DUI case, and he received a suspended jail sentence in 2017. He ended up missing that entire season. 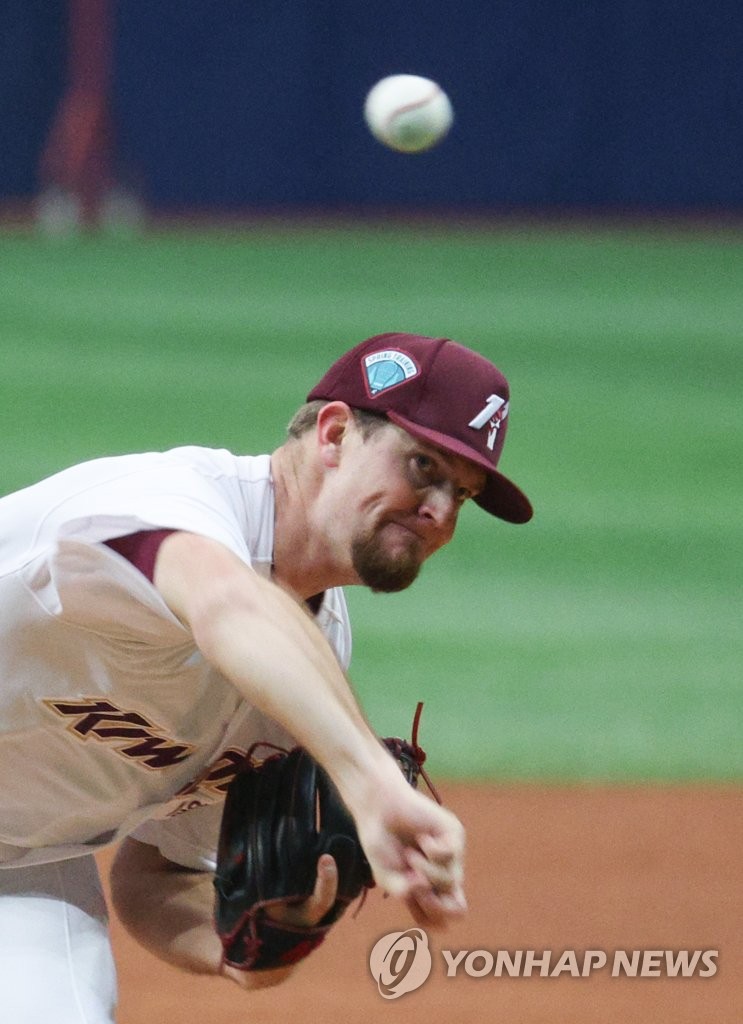 The Pirates released him in August 2019 after giving him a new one-year contract. Kang hasn't played organized baseball since, and he abandoned his KBO comeback bid in 2020 in the face of heated criticism from the public.

The Heroes announced on March 18 they would bring back Kang, who will first have to serve a one-year suspension handed down by the KBO in 2020 over his three DUI cases. That decision hasn't sat well with KBO fans who don't think Kang deserves a lifeline after three DUI accidents and that Kang hasn't been sufficiently repentant.

Even in their brief time together, Kang left an impression on Eppler as a hitter with "some really good power." But baseball will have to take a back seat here.

"Of course, he has made his mistakes, and I just really hope that he realizes those and wants to change, and wants to be better as a person, not as a baseball player," Eppler said. "He's obviously a really good baseball player. So I really hope he's figured that out for himself. I think he can add some really good value to this team and another big bat that can do some damage."

In a perfect world for Eppler, he would sign a major league deal after this season and wouldn't get to play with Kang. But the pitcher himself doesn't want to get too far ahead of himself.

"Where I'm at in my career right now is I'm going to take care of what I can and try to be the best pitcher that I can be, and whatever happens next is going to happen," he said. "I'm a big, big believer in Jesus, and I just believe that He's got everything planned in my life already. So my plan is just to follow what the plan is." 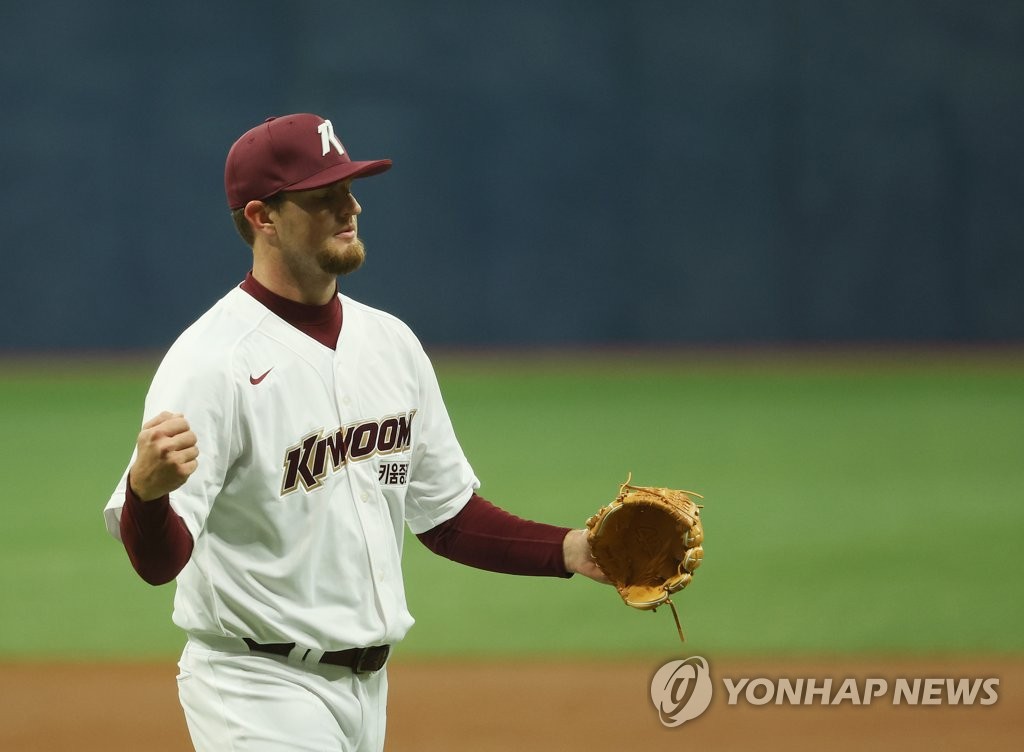