SEOUL, April 5 (Yonhap) -- The sister of North Korean leader Kim Jong-un said South Korea is no match for her nuclear-armed country, as she reiterated Pyongyang's position that Seoul is not a "principal enemy," according to state media Tuesday.

Kim Yo-jong, vice department director of the Central Committee of the Workers' Party of Korea, described the minister's remarks as an "irretrievable very big mistake."

"If anyone does not provoke us, we will never strike it before anything else," she said in her second press statement in a few days carried by the Korean Central News Agency. 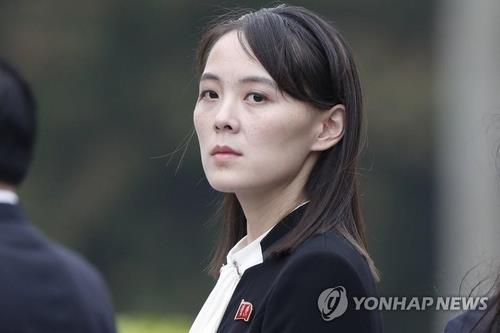 "We will not fire even a single bullet or shell toward south Korea. It is because we do not regard it as match for our armed forces," she added, emphasizing once again that the North is a nuclear weapons state. "In other words, it means that unless the south Korean army takes any military action against our state, it will not be regarded as a target of our attack."

While the North opposes a war that may put the peninsula into a "disaster" like that in the 1950s, things could change, depending on the South's moves, she warned.

"In case South Korea opts for military confrontation with us, our nuclear combat force will have to inevitably carry out its duty," she said.