SEOUL, April 12 (Yonhap) -- North Korea is continuing to unilaterally demolish a South Korea-built golf resort near Mount Kumgang on its east coast, still unresponsive to Seoul's inquiry about the issue, according to a government official here Tuesday.

"The dismantlement of the Haegumgang Hotel and demolition of the golf course have been constantly ongoing," the unification ministry official told reporters on the condition of anonymity. The official refused to elaborate, saying it is an intelligence-related matter.

NK News, a news outlet specializing in North Korea issues, reported earlier the North appears to have demolished facilities at the Ananti Golf and Spa Resort on April 9 and 10, citing satellite imagery provided by Planet Labs.

On Monday, the South's government asked the North via the inter-Korean liaison hotline to confirm the status of the hotel and the golf resort, but there has been no formal reply yet, the official said.

"We strongly urge North Korea to immediately stop its unilateral measures that infringe upon the property rights of our companies," the official said.

Pyongyang earlier announced it would remove the facilities at Mount Kumgang, as its leader Kim Jong-un ordered the authorities to tear down all "unpleasant-looking" facilities at the resort in 2019, which was once an icon of inter-Korean joint ventures.

The tour program to Mount Kumgang was launched in 1998, in which many South Koreans made cross-border trips to the scenic mountain. It came to a halt in 2008, when a South Korean tourist was fatally shot by a North Korean solider.

Meanwhile, North Korean state media reported that a forest fire broke out on Mount Kumgang over the weekend, damaging hundreds of hectares of forests and facilities. It was not immediately confirmed whether the fire was related to the demolition of the golf resort. 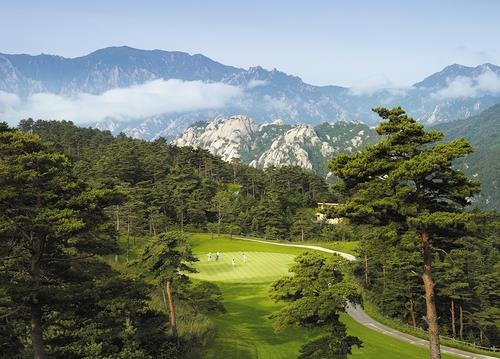