SEOUL, April 13 (Yonhap) -- The number of registered vehicles in South Korea had surpassed 25 million as of end-March, which means one out of every two South Koreans owns a vehicle, data showed Wednesday.

Car registrations had come to 25.07 million units in the country of 52 million people as of end-March, up 2.12 percent from a year earlier, according to the data from the Ministry of Land, Infrastructure and Transport.

The number of environmentally friendly cars registered here had advanced 7.7 percent from the previous year to reach 1.25 million as of end-March, accounting for five percent of total car registrations, the data showed.

Of the total registered vehicles, foreign brands accounted for 12 percent, or 3 million units. The proportion has been on the rise over the past several years, from 9.4 percent in 2018 to 10.2 percent in 2019 and further to 11.8 percent last year, the data showed.

But the number of cars newly registered in the first quarter fell 12.6 percent on-year to 393,000 amid supply shortages of auto chips, according to the ministry. 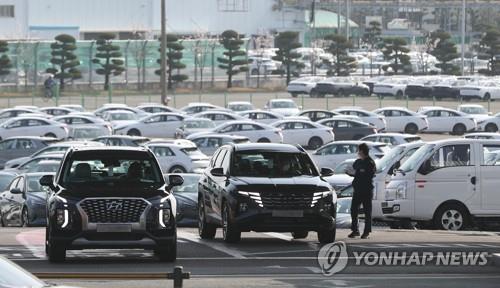