"The proper combination of market mechanisms, such as an emissions trading system, and non-price policy support is a must in responding to climate change," Hong said, citing such measures as financial support and research and development.

The minister also said it needs to take into consideration each nation's different industry structure and other economic conditions when countries try to coordinate various measures on climate issues.

South Korea pledged to reduce greenhouse gas emissions by 40 percent from the 2018 levels by 2030 and reach carbon neutrality by 2050. The country has operated a domestic emission trading system among some industries since 2015.

South Korea has earmarked 3 billion won (US$2.42 million) from 2022 through 2024 for developing nations' climate change related projects through the United Nations Framework Convention on Climate Change.

Launched in 2019, the coalition brings together fiscal and economic policymakers from more than 50 nations to discuss tools for global responses to climate change, such as carbon taxes and emission trading systems. 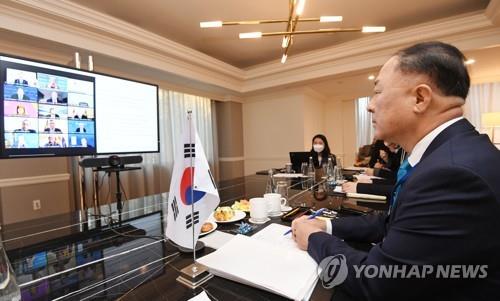 Georgieva said that the war in Ukraine has exacerbated downside risks in the global economy, but its impact on South Korea is expected to be limited thanks to its healthy financial status and active macroeconomic policy measures, such as the Korean New Deal, according to the finance ministry.

The New Deal policy calls for investing 160 trillion won to create 1.9 million jobs by 2025 by promoting green and digital sectors.

Earlier this week, the IMF lowered its 2022 growth forecast for the global economy to 3.6 percent from its earlier estimate of 4.4 percent. It also cut the growth outlook for South Korea to 2.5 percent this year from its March estimate of 3 percent.

On Tuesday, Hong also met with his Indian counterpart, Nirmala Sitharaman, and discussed ways to boost bilateral economic cooperation and the global economic situation, according to the ministry. 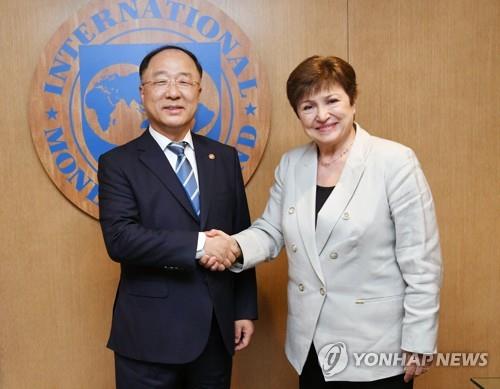