SEOUL, April 28 (Yonhap) -- Samsung Electronics Co. on Thursday reported its best first-quarter earnings in four years on the back of solid chip and mobile demand.

Its January-March operating income beat the market consensus of 13.2 trillion won from a survey by Yonhap Infomax, the financial arm of Yonhap News Agency.

Sales increased 18.9 percent on-year to 77.7 trillion won in the first quarter, the all-time quarterly record and the third consecutive quarter that the tech giant has logged more than 70 trillion won in quarterly sales. 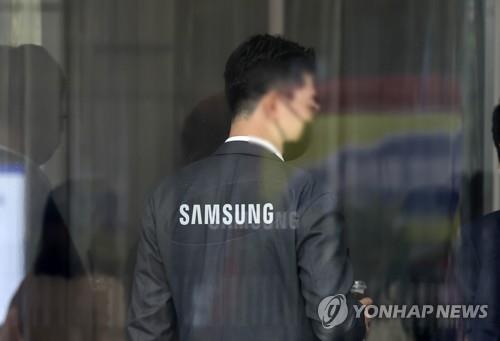 Samsung's memory business logged 26.87 trillion won in sales from January to March, a record-high in quarterly sales. The sector earned 8.45 trillion won in operating profit, about 60 percent of its Q3 profit.

The memory price declined less than previously expected thanks to solid chip demand used in servers and PCs, Samsung said.

The strong demand is expected to continue in the second half, as "global companies and cloud service providers are increasing their infrastructure investments, as they are moving into new growth areas, such as artificial intelligence and machine learning," Han Jin-man, executive vice president and head of memory global sales and marketing, said during an earnings call Thursday morning.

Its foundry, or contract chip manufacturing, business achieved its highest-ever first quarter sales, as demand was solid from all applications and yields of the advanced process have improved.

Kang Moon-soo, senior vice president and head of Samsung's foundry market and strategy team, said the foundry business will continue to improve in the coming years.

"If you look at our order book for the next five-year period, the (total) orders are around eight times our previous year's revenue," he said.

While equipment lead time increased due to the disruption of global supply chains, causing concerns, he said the company was responding to the issue by "keeping our equipment investments flexibly in line with the industry situation."

The mobile business saw growth in terms of sales and profitability from the previous quarter, thanks to the success of its latest flagship Galaxy S22 series launched in late February, Samsung said.

The tech giant expected its phone business to remain solid in the coming months, with the expected launch of new foldable smartphones.

"We are currently all hands on deck regarding preparing the new foldable model scheduled for launch in the second half," Kim Sung-koo, vice president of Samsung's mobile business, said.

The company is aiming to make its foldable smartphone series another "main column next to the Galaxy S series within our business," he added.

Meanwhile, its TV business shrank in the first quarter amid sluggish demand for TVs, caused by geopolitical risks involving Russia and Ukraine and the lifting of pandemic restrictions in many countries.

Despite demand uncertainties, Samsung said it was seeing opportunities in the premium and ultra large sized screen segments.

In the display sector, business has improved from a year ago, driven by strong premium products, including Neo QLED TVs, according to the company. Its home appliances business logged record quarterly sales helped by premium BESPOKE products.

Samsung said it was winding down its liquid crystal display (LCD) business as previously announced to focus on the more profitable organic light-emitting diode (OLED) sector.

The tech giant also said its performance was partly helped by the weak Korean won.

"The strength of the U.S. dollar against the Korean won outweighed the weakness in some emerging currencies, leading to a positive impact of approximately 300 billion won in operating profit compared with the previous quarter," the company said. 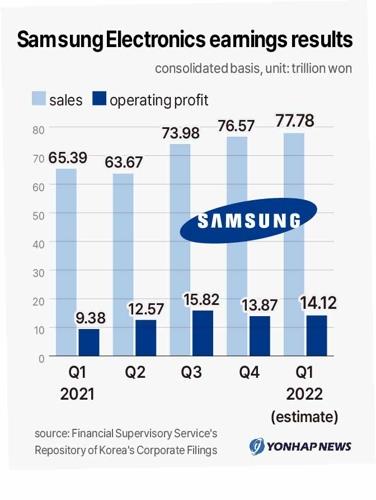