SEOUL/INCHEON, May 8 (Yonhap) -- Lee Jae-myung, former presidential nominee of the ruling Democratic Party (DP), declared his bid for a parliamentary seat in the June by-elections Sunday, vowing to lead his party to an overall victory.

Lee, a former governor of Gyeonggi Province, announced his run for a seat in the Gyeyang district of Incheon, 40 kilometers west of Seoul, two months after he lost the presidential election to incoming President Yoon Suk-yeol.

"After deep thought, I decided to lend my support to the Democratic Party in crisis and dangerously charge head-on to lead the party to victory in the difficult local elections," he said at a press conference in Gyeyang.

"I will give my all first for victory in Incheon and then lead (our party) to a majority victory nationwide." 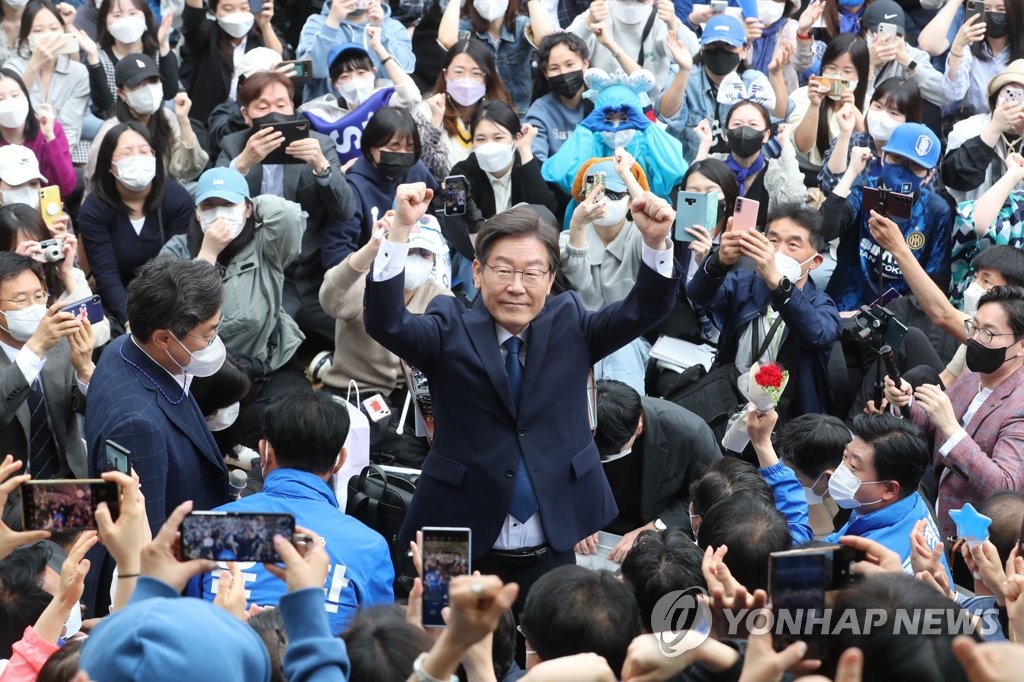 Parliamentary by-elections are scheduled to take place in seven constituencies concurrently with the local elections on June 1.

Lee is hoping to win the seat in the Gyeyang-B district that was held by former DP Chairman Song Young-gil before Song stepped down to run for Seoul mayor in the upcoming polls.

"I received a lot of advice that I should keep my distance from the local elections in consideration of my own political safety, and it's true that I myself was negative about making an early return," he said. "However, I could not possibly turn my back to the party's difficulties and the risky situation we face in the local elections."

Lee claimed responsibility for his defeat in the presidential election, saying the only way to bear that responsibility will be to provide a "way out" for his party and its candidates, and offer hope to his distraught supporters.

Lee appealed to voters for an "opportunity to work," referring to his self-branded image of a competent worker.

He also promised to turn Gyeyang into the "Silicon Valley of Incheon" filled with creative talent and new jobs.

Lee has been keeping a low profile since his defeat to Yoon. But following the request of his party and aides, Lee reportedly decided to come to the front to help the DP achieve victory against its rival People Power Party (PPP) in the upcoming elections.

Still, some have pointed to Lee's lack of connection to Incheon and raised the possibility his early return may backfire.

The PPP has cast his parliamentary bid as an attempt to get arrest immunity, as in South Korea, lawmakers cannot be arrested while the parliament is in session unless it approves or unless they are caught red-handed.

Lee has been accused by the PPP of masterminding a massive corruption case surrounding an apartment development project conducted in Seongnam, south of Seoul, during his time as mayor of the city.