SEOUL, May 9 (Yonhap) -- K-pop supergroup BTS will not attend the upcoming 2022 Billboard Music Awards (BBMAs) even though it is highly likely to bring home multiple prizes, sources in the music industry said Monday.

The sources said the septet has recently decided not to attend the awards ceremony to be held in Las Vegas on Sunday (U.S. time).

The event is considered one of the three biggest music awards in the United States, along with the American Music Awards and the Grammy Awards.

The South Korean band scooped up four prizes at last year's BBMAs, making it its fifth consecutive year to win at least one award at the awards show.

It is the most nominations the group has ever received at the BBMAs.

The group reportedly plans to deliver a virtual acceptance speech if it wins an award with no plans to perform on stage.

The sources say BTS will instead focus on preparing for "Proof," its new album set to drop June 10. 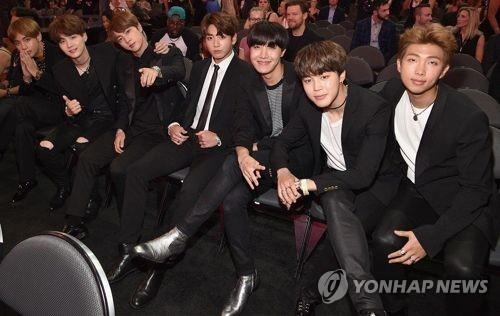