SEOUL, May 13 (Yonhap) -- A presidential secretary resigned Friday amid controversy over his past remarks on homosexuality and wartime sex slaves, the presidential office said Friday.

Kim Seong-hoi, presidential secretary for religious and multicultural affairs, came under fire following revelations he described homosexuality as "a type of mental disease," among other views he posted on Facebook.

"(Kim) stated he will resign voluntarily in order to not cause trouble to the president," the office said in a statement.

Kim is the first presidential secretary to depart since the launch of the new administration Tuesday.

In one Facebook post, he used a word for "money for sex" to describe calls for Japan to pay reparations to Korean women forced into sexual slavery for Japanese troops during World War II.

He later issued an apology, but it backfired, as he claimed that under the Joseon Dynasty (1392-1910), "half the female population were objects of sexual pleasure for the noblemen, who were their masters at any time." 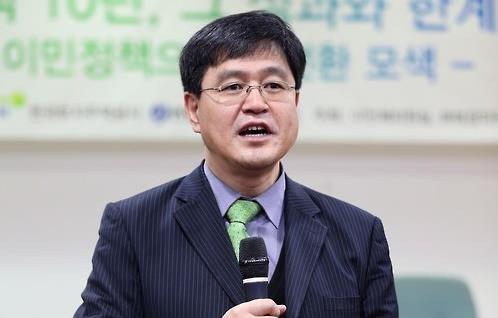