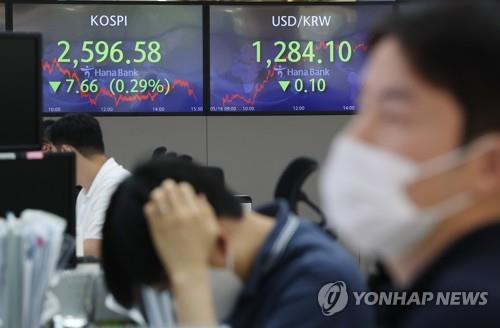 But the market soon pared earlier gains following Bank of Korea Gov. Rhee Chang-yong's comments that he is not eliminating the option of a 50-basis-point rate hike, as uncertainty about already-elevated inflation remains high.

"It is not the stage where we can completely rule out the possibility of a big step hike," Rhee said, adding"Whether we could consider (a 0.5-percentage point increase) will rest on how much inflation rises going forward."

Last month, the BOK raised the policy rate by a quarter-percentage point to 1.5 percent as part of efforts to tamp down rising inflation and curb household debt.

"BOK Governor's comments on a potential big step also weighed on the market," he added.

Bond prices, which move inversely to yields, closed lower. The yield on three-year Treasurys rose 13.5 basis points to 3.046 percent, and the return on the benchmark five-year government bond jumped 10.3 basis points to 3.225 percent.