The country's total fertility rate -- the average number of children a woman bears in her lifetime -- came to 0.86 in the January-March period, the lowest figure for any first quarter, according to the data compiled by Statistics Korea.

It marked the 12th straight quarter that the figure had been below 1.

As the number of newborns tends to decline in later months every year, the total fertility rate is widely expected to remain below 1 in 2022 for the fifth consecutive year. The figure was 0.81 last year.

In the first quarter, 68,177 babies were born in the country, down 2.8 percent from a year ago and the lowest tally for any first quarter ever.

A total of 22,925 babies were born in March, down 4.2 percent from a year earlier and the lowest tally for any March.

On an annualized basis, the number of newborns has been falling since December 2015.

South Korea is struggling with a chronic decrease in childbirths as many young people delay or give up on getting married or having babies amid a prolonged economic slowdown and skyrocketing housing prices.

Accordingly, the country's population fell by 21,526 in March, representing the 29th straight month of decline.

South Korea reported the first natural decline in population in 2020, as the number of deaths outpaced that of births. The country's total population declined for the first time last year, due to the low birthrate, rapid aging and a fall in incoming foreigners due to the pandemic.

Meanwhile, the number of people getting married fell 5.5 percent on-year to 45,377 in the first quarter, the lowest since the third quarter of 2021. Marriages declined 8.6 percent to 15,316 in March, the lowest for any March. 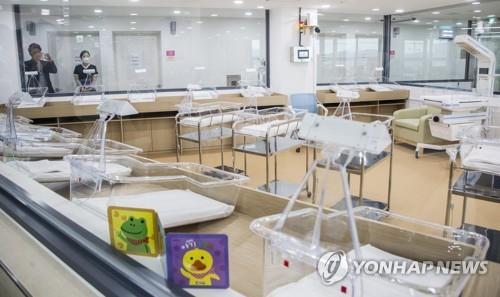