SEOUL, June 7 (Yonhap) -- The government of President Yoon Suk-yeol has a role to play in rebuilding Ukrainian cities ravaged by Russia's invasion, as it has vowed to take on greater international responsibilities, the ruling party chief was quoted as saying.

People Power Party (PPP) Chairman Lee Jun-seok left for Ukraine on Friday as head of a PPP delegation of about 10 people, including lawmakers, in a trip aimed at discussing cooperation and expressing support for the Ukrainian people amid the war with Russia.

The delegation entered Ukraine from Poland on Saturday, and visited Bucha and Irpin, satellite towns of Kyiv, the next day, according to party officials. The party belatedly disclosed the delegation's itinerary in consideration of their security.

"We are here to find out what we can do for Ukraine," Lee was quoted as saying by party officials. "A task has been created for the Yoon Suk-yeol government as it vowed to strengthen its roles in the international community."

During the second day of the visit, the delegation met with Ukrainian officials and discussed ways to provide support, with Lee emphasizing that he will report his findings to President Yoon, the PPP said.

The delegation's exact schedule in Ukraine has not been disclosed in real time, but it has already been reported that the delegation had visited the capital city of Kyiv, as the Kyiv governor disclosed their visit in a Facebook post.

According to Lee's Facebook post, Lee said his last message to the president was "Slava Ukraini," meaning Glory to Ukraine.

Lee, however, did not disclose the exact time and details of his conversation with the president. 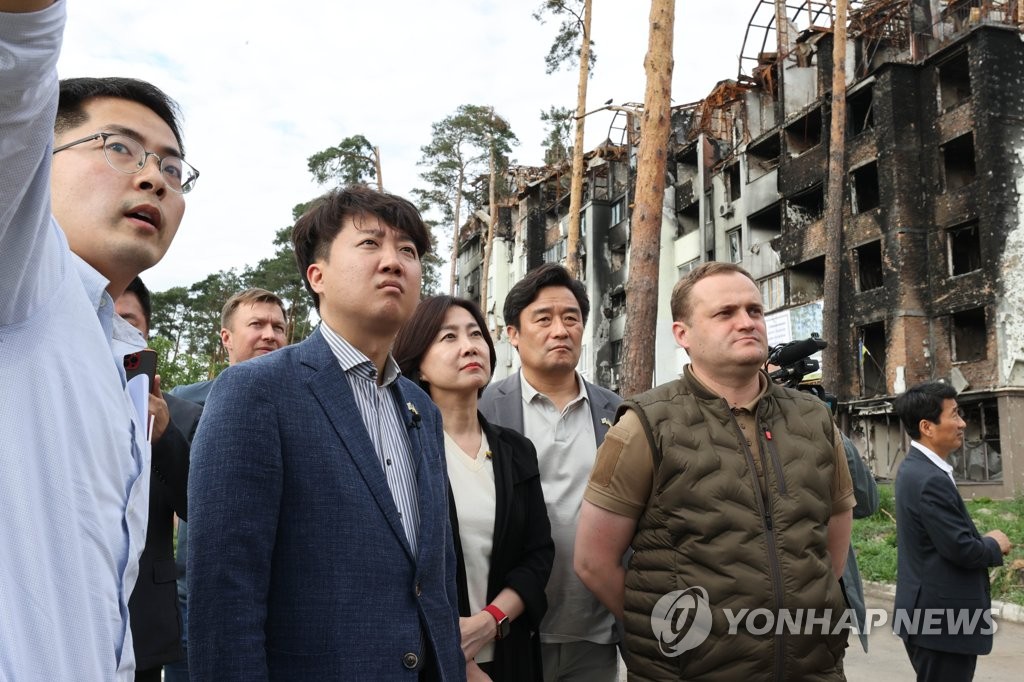 Meanwhile, Lee lashed out at critics of his trip, saying they are the ones who actually make the situation diplomatically difficult for the South Korean government as they tell stories that are different from the government's position.

"While I'm in Ukraine, Ukraine politicians showed their anger as some of the people in South Korea made remarks siding with Russia," Lee wrote on his Facebook page. "I am fully aware of the position of the government and the foreign ministry, and I am doing my work within that boundary."

Lee's post is apparently targeting Rep. Chung Jin-suk of the PPP, who on Monday slammed the party chief for forging ahead with the trip for his own political gains despite opposition from government officials handling foreign affairs and national security.