SEOUL, June 20 (Yonhap) -- President Yoon Suk-yeol suggested Monday his administration could disclose more information on a fisheries official killed at sea by North Korea in 2020, days after his government overturned the previous administration's finding that the official attempted to defect to the North.

The comment came as the main opposition Democratic Party (DP) has been refusing to cooperate for the disclosure of confidential information on the fisheries official shot and killed by North Korea's military near the western sea border on Sept. 22, 2020, after going missing while on duty on board a fishery inspection boat.

The then government of President Moon Jae-in tentatively concluded that the official was killed while attempting to defect to the North, but the bereaved family has strongly questioned the announcement, arguing he had no reason to do so.

Last week, the Coast Guard and the defense ministry announced that they have not found any circumstances backing the probe results from two years ago, reversing from their previous stance and apologizing to the bereaved family.

On Monday, Yoon said the government should do all it can to address suspicions people have.

"I've always believed ever since I was the chief of the Central District Prosecutors Office or the prosecutor general under the previous administration, that the government should set an example and do what it can under the Constitutional spirit of a liberal democracy and the rule of law," Yoon told reporters as he arrived for work.

"That thought hasn't changed, and as the state's duty first and foremost is to protect the people, if the people have questions about that, I think it's a bit problematic if the government responds passively, so I will look into it carefully," he said.

The opposition DP has accused the Yoon government of trying to frame it and the Moon administration as being pro-North Korea.

When asked to comment on the case, Yoon said simply, "I will handle it fairly in accordance with the law and principles." 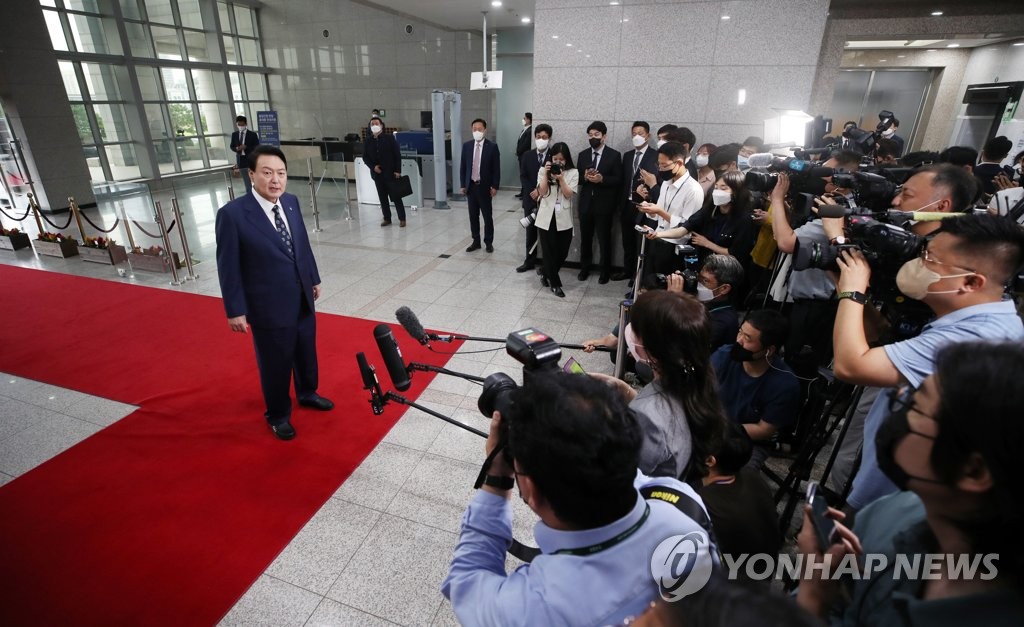 The ruling People Power Party (PPP) backed Yoon's suggestion, calling on the DP to cooperate for the disclosure of information related to the case.

"A South Korean public servant was brutally killed by North Korea, but the (previous) government justified the North's action by claiming the official attempted to defect and inflicted secondary harm on his bereaved family," PPP floor leader Kweon Seong-dong said at a party meeting.

"It is human nature to uncover (the truth) when there are suspicions, even if it is about the death of only one person," Kweon said.

The PPP plans to launch a task force, comprised of its lawmakers who were members of parliamentary committees related to the case, in an effort to reveal the truth behind the death.

In a radio interview with MBC, Rep. Ha Tae-Keung, who will lead the task force, raised suspicions that the Moon government had manipulated and exaggerated circumstantial evidence when it announced the deceased official appeared to have tried to defect to the North.

Kweon said the PPP also plans to launch an investigation into a 2019 case where the then government repatriated two North Korean sailors who tried to defect to South Korea after allegedly killing 16 fellow crew members on a fishing boat. 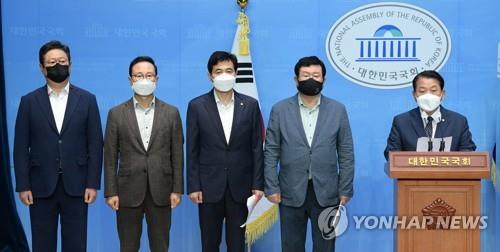 The DP struck back, branding the ruling party's demand as a political offensive while arguing that lawmakers from both the ruling and opposition parties at the time of the incident agreed with the tentative conclusion that the official attempted to defect.

"Sufficient classified information, which is also known as SI, was reported to the parliamentary defense and intelligence committees at the time," said Rep. Yun Kun-young of the DP, who served as a senior presidential secretary at the time of the incident.

SI refers to SIGINT, or signals intelligence, which is obtained from intercepting signals.

"I can't understand why PPP lawmakers are saying something different now," he said, claiming that PPP members of the parliamentary defense committee at the time had agreed that the deceased official had an intent to defect.

DP lawmakers, who were then members of the committee, said they are willing to cooperate for the disclosure of the minutes of committee meetings if the PPP wants their disclosure even if it hurts the country's national interests.