SEOUL, June 22 (Yonhap) -- South Korea has decided to establish a mission to the North Atlantic Treaty Organization (NATO) in Brussels, a presidential official said Wednesday ahead of President Yoon Suk-yeol's participation in a NATO summit next week.

Yoon will attend the NATO summit in Madrid, Spain, on June 29 and 30, on his first overseas trip as president, National Security Adviser Kim Sung-han said during a press briefing.

South Korea is not a member of the military alliance but has been invited as a partner nation, along with countries, such as Japan, Australia and New Zealand.

The new NATO mission will be headed by the South Korean ambassador to Belgium, who currently also doubles as the ambassador to the European Union, a second presidential official said.

On the sidelines of the NATO gathering, Yoon could hold a trilateral summit with U.S. President Joe Biden and Japanese Prime Minister Fumio Kishida.

First lady Kim Keon-hee is also likely to accompany the president on the trip, another presidential official said. 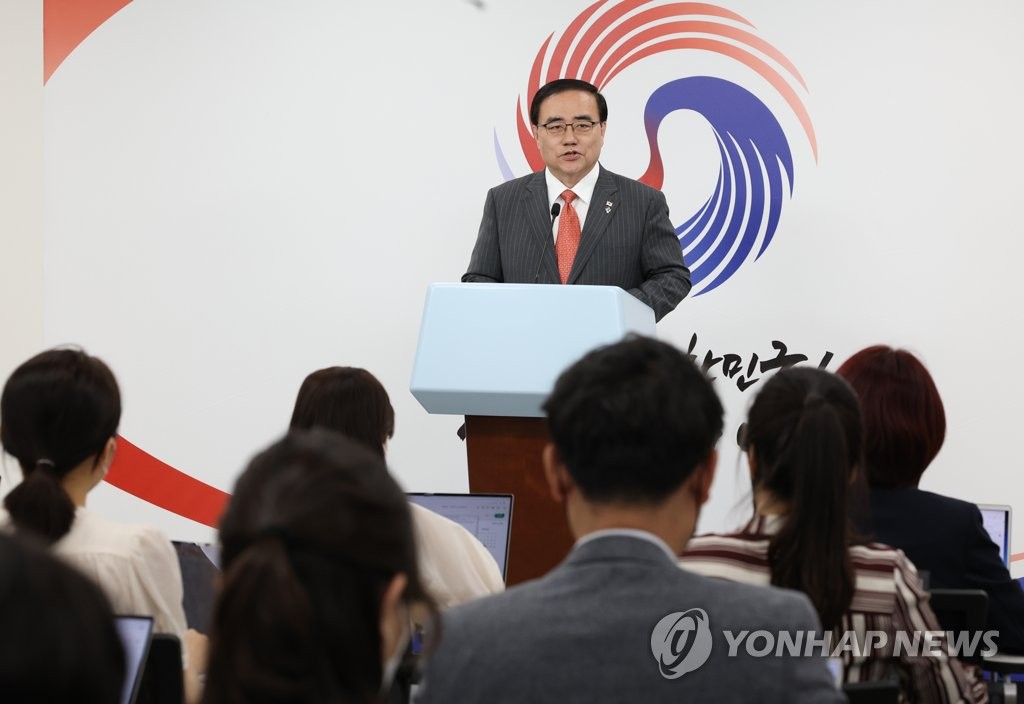 "The NATO summit will include an official program for spouses," the third official said. "We're positively reviewing her participation as much as possible."

Kim Sung-han said Yoon's attendance at the NATO summit will achieve three purposes, including strengthening the "value alliance" based on a liberal democracy with the 30 NATO member states and partner nations.

The president will also build the foundation for a "comprehensive security network" with NATO states and explore ways to effectively respond to emerging security threats, such as cyber and aerospace threats, and climate change.

"By establishing a NATO mission in Brussels, Belgium, where NATO is headquartered, we will be able to increase information-sharing and strengthen our networks with NATO members and partner nations," Kim said.

The president plans to use the gathering to hold a series of bilateral summits on the margins to discuss economic issues, such as nuclear power, semiconductors and renewable energy, seek international support for South Korea's bid to host the 2030 World Expo in Busan, and strengthen cooperation over North Korea's nuclear weapons program, Kim said.

The second presidential official, who spoke on condition of anonymity, elaborated that around 10 bilateral meetings are being planned, including with countries such as Poland, the Czech Republic, Denmark and the Netherlands.

A bilateral summit with Kishida has still not been finalized, but "there is concern in both countries about whether (the leaders) will be able to focus on the South Korea-Japan agenda" so spontaneously and on the sidelines of a separate event, that official said.

If realized, the summit will be the first between the two countries in two and a half years, and would be watched closely for signs of a thaw in tensions over disputes stemming from Japan's 1910-45 colonial rule of the Korean Peninsula.

"We expect that a pull-aside could be possible," the third official noted.

"It would likely focus on trilateral security cooperation against the backdrop of serious concerns about the possibility of a seventh nuclear test by North Korea," the third official said.

During a joint session with NATO members and partner nations, Yoon plans to speak for three minutes and emphasize his administration's commitment to achieving North Korea's denuclearization, the official added.