The show will take place at 8 p.m. at Gocheok Sky Dome on Korean Liberation Day on Aug. 15, a holiday that commemorates the Korean liberation from Japanese colonial rule 77 years ago, Hyundai Card said.

It will be her second concert in South Korea since the first one held on Aug. 15, 2018, at the 2,000-seat Yes24 Live Hall in eastern Seoul. She originally planned to hold a show in 2020 but canceled it due to the COVID-19 pandemic.

The event is part of Eilish's world tour for her second full-length album, "Happier Than Ever," released in May last year. The singer-songwriter will give live performances of the tracks off the album and her previous hits during the show.

The upcoming show is expected to ignite fierce competition for the seats although its venue, Gocheok Sky Dome, is the largest capacity stadium in South Korea, with room for around 25,000 attendees. Her world tour, which includes stops in North America and Europe, sold out just hours after tickets went on sale last year.

The 21-year-old star plans to donate part of the proceeds from the ticket sales to the nonprofit environmental group Reverb. 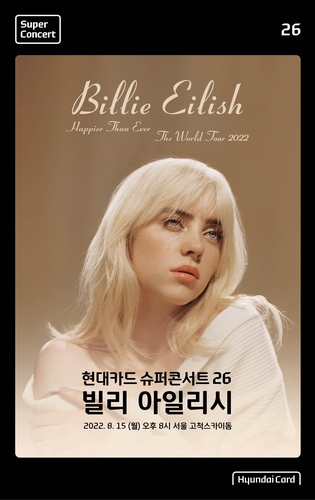