Institutions bought a net 926 billion won, while foreign and retail investors offloaded a net 296 billion won and 671 billion won worth of shares, respectively.

"The market will remain volatile for the time being as the U.S. central bank could raise interest rates again next month and the Bank of Korea also seems to be on a course toward big-step raises," said Huh Jae-hwan, an analyst with Eugene Investment & Securities. 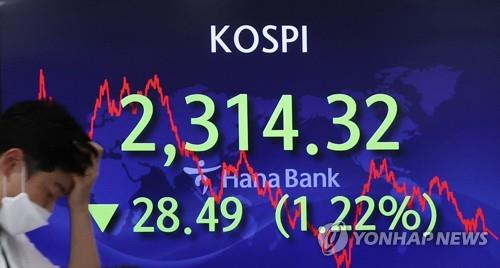 Bond prices, which move inversely to yields, closed lower. The yield on three-year Treasurys rose 8.6 basis points to 3.608 percent, and the return on the benchmark five-year government also went up 6.2 basis points to 3.769 percent.