Hwang teamed up with Lee Yoo-yeon, Kim Woo-min and Lee Ho-joon for the new national record of 7:08.49 in the heats for the men's 4x200m freestyle relay at the FINA World Championships at Duna Arena in Budapest. The quartet ranked second in its group, 1.03 seconds behind Hungary, and fourth overall in the heats to join seven other teams in the final.

Hwang won silver in the men's 200m freestyle in the Hungarian capital Monday, becoming just the second South Korean swimmer, after Park Tae-hwan, to grab a medal at world championships. 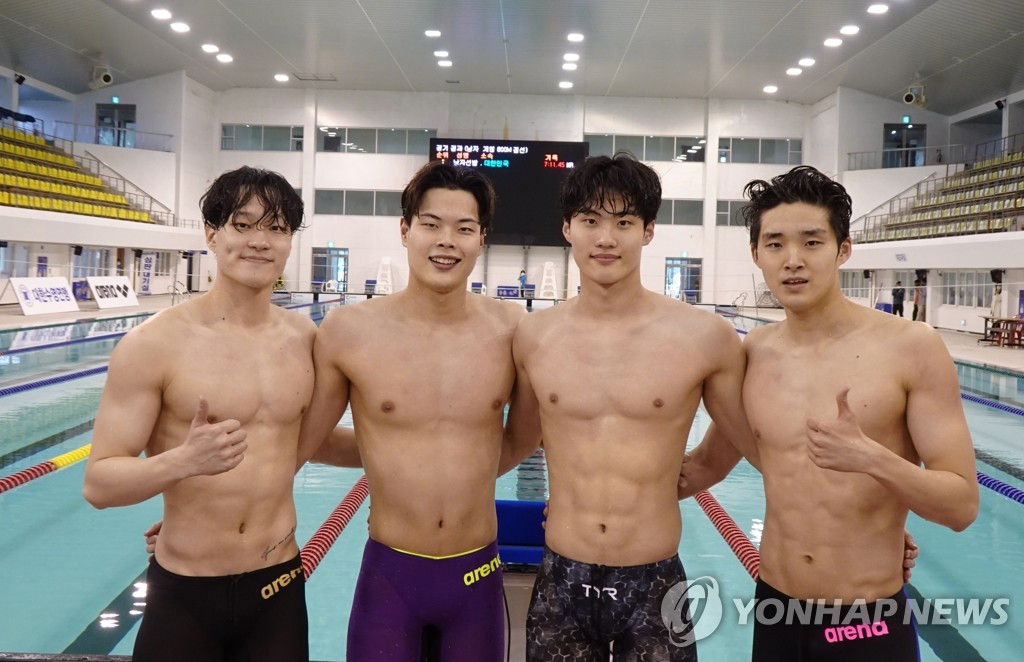 In the 100m freestyle on Tuesday, Hwang initially missed out on the semifinals after finishing tied for 17th in the heats, with only the top 16 advancing. A spot opened up for Hwang in the semifinals when Caeleb Dressel of the United States withdrew for unspecified medical reasons, but Hwang, the first alternate, finished in 11th, as the top seven moved on to the final.

Last Saturday, Hwang helped South Korea break the national record in the men's 4x100m freestyle relay with a time of 3:15.86 in the heats. The team still failed to make it to the final.

Hwang opened the race for South Korea in Thursday's heats, and he beat Hungary's Richard Marton by 0.10 second for first place at 1:46.42.

Kim Woo-min, the second swimmer, extended that lead to 0.62 second, as South Korea reached the halfway point in 3:33.07.

Lee Yoo-yeon lost that lead, however, with Balazs Hollo putting Hungary up by 0.39 second with 200m left.

Kristof Milak, the Olympic 200m butterfly champion, then put on the finishing touches for the host country, but Lee Ho-joon kept South Korea firmly in second place as the anchor.

The same South Korean quartet had owned the previous national record of 7:11.45, set in the national team trials in May 2021.