SEOUL, June 24 (Yonhap) -- President Yoon Suk-yeol met with a group of South Korean and foreign veterans of the Korean War on Friday to thank them for their service.

The event -- a luncheon at Hotel Shilla in Seoul -- was held one day before the country marks 72 years since the war broke out.

More than 200 veterans and their family members, including 12 veterans from nine countries that fought alongside South Korea under the U.N. flag, were present.

"The freedom, peace and prosperity that the Republic of Korea enjoys today were built on the foundation of the blood, sweat, sacrifice and dedication of our veterans and veterans under the U.N. flag," the president said during the event. 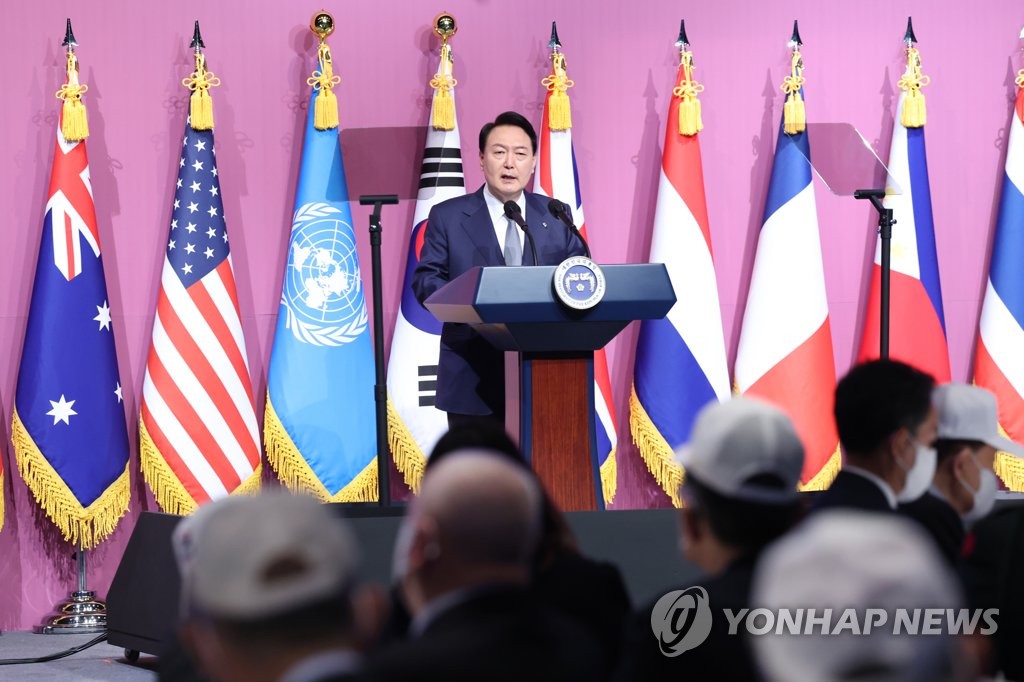 "The Republic of Korea will uphold your courage and noble spirit and do its part to defend freedom as a responsible member of the international community," he said.

Yoon acknowledged some of the veterans in attendance, including three South Koreans who escaped from North Korea 50 years after they were captured during the war.

He also expressed his sympathy for those who remain captured in North Korea and the families who have yet to receive the remains of their loved ones.

"Our government will not stop our efforts to recover the remains of those killed in the Korean War," the president said. "We will do our best until the day every last person is returned to the arms of their families."

Recalling this week's successful launch of the homegrown Nuri space rocket, Yoon said such an honor would not have been possible without the veterans.

"You are the heroes that made possible the Republic of Korea of today," he said.

Yoon awarded "Apostles of Peace" medals to five veterans from the Philippines, the United States, Canada and Ethiopia.