SEOUL, June 26 (Yonhap) -- The chief of the main opposition Democratic Party said Sunday he will establish a task force on the 2020 death of a South Korean fisheries official at the hands of North Korea, accusing the ruling People Power Party of distorting facts for political gains.

Rep. Woo Sang-ho, the DP's interim leader, said the task force will be headed by Rep. Kim Byung-joo, an Army general-turned-lawmaker, and will be charged with countering the PPP's attempts to take advantage of the death for political purposes.

The move came as the PPP has stepped up its offensive against the DP and the administration of former President Moon Jae-in after the Coast Guard and the defense ministry overturned their previous announcement earlier this month that the late official was shot and killed while attempting to defect to the North.

The 47-year-old official was fatally shot by the North's military on Sept. 22, 2020, near the inter-Korean sea border in the Yellow Sea, after going missing the previous day while on duty aboard a fishery inspection boat. The Coast Guard and the defense ministry announced at the time he could have attempted to defect.

The PPP has accused the previous government of reaching the conclusion without enough evidence in an effort not to strain relations with the North amid Moon's push for a declaration to formally end the 1950-53 Korean War to jump-start the stalled peace process with Pyongyang.

"The People Power Party appears to be distorting facts too much," Woo said during a regular press briefing, announcing his plan to set up the task force. "We've put up with this for so long, but we've now decided to respond."

Other members of the team will include Rep. Yun Kun-young, who served as a key presidential aide to Moon, as well as Reps. Hwang Hee and Kim Byung-kee. 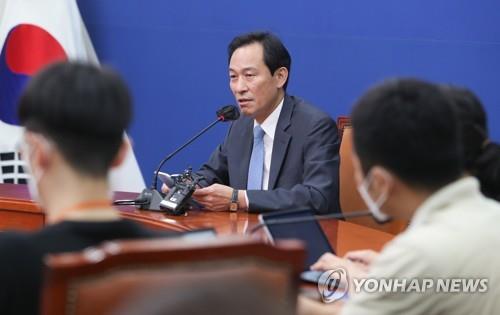