SEOUL, June 28 (Yonhap) -- Police on Tuesday said they found the car of a missing family off the southwestern coast after a female elementary school student and her parents disappeared mysteriously from a guesthouse in the region about a month ago.

The car with the same license plate as that of the family -- 10-year-old Cho Yu-na and her parents in their 30s -- was found at about 5:12 p.m. hanging on the fence of a fishing farm off Wando, according to local police and coast guard.

Whether there were bodies inside have yet to be confirmed. Police said they plan to raise the car from the water early the next morning after taking necessary measures to protect any evidence. 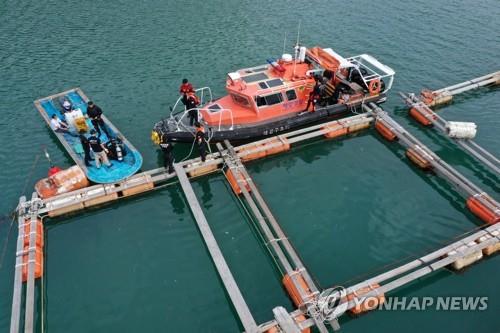 A massive search has been under way to find the Cho family since they disappeared mysteriously last month from a guesthouse in Wando, an island about 120 kilometers south of their home, located in the southwestern city of Gwangju.

Cho has been absent from her Gwangju school since May 19 after reporting she would take part in an outdoor learning program on Jeju Island together with her parents for about a month.

The family was last seen on May 30, when the mother was captured on closed-circuit TV carrying a child presumed to be Cho on her back, while the father was looking on. No other major tips have since been obtained.

The cellphones of Cho and her mother were switched off two hours later near the guesthouse, while the father's cellphone was also switched off at around 4 a.m. the following morning on an adjacent dock, police said.