SEOUL, June 29 (Yonhap) -- Representatives of South Korea's labor and management on Wednesday submitted second amendments to their respective proposals for an increase in next year's minimum wage at a meeting of a labor ministry-affiliated panel, only to confirm a wide gap.

Under the current law, the 27-member Minimum Wage Commission (MWC), a trilateral panel composed of nine representatives each from labor, management and the general public, has to complete its review on the new minimum wage by mid-July for a formal announcement by Aug. 5 every year.

At this year's eighth plenary session of the MWC, the labor representatives revised their proposal for next year's minimum hourly wage from 10,340 won (US$7.96) to 10,090 won, which is 10.1 percent higher than the current minimum wage of 9,160 won.

Management representatives also amended their new minimum wage proposal for a second time, raising the figure from 9,260 won to 9,310 won, or an on-year increase of 1.6 percent, at the same meeting held at the Sejong Government Complex in Sejong.

In their first revised proposals disclosed earlier this week, the labor side lowered its sum from 10,890 won to 10,340 won, while the management side raised its figure from 9,160 won to 9,260 won.

Despite the two revisions each by labor and management, the MWC members are still likely to face difficulty coming up with an agreement due to the wide gap in the proposed figures.

If there is no progress in the panel discussions, general public members of the MWC are expected to ask labor and management representatives to submit their third revised proposals within a specific range. 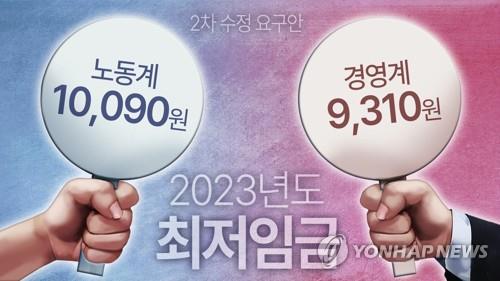