MADRID, June 29 (Yonhap) -- President Yoon Suk-yeol said Wednesday that trilateral cooperation between South Korea, the United States and Japan has become ever more important in the face of North Korea's growing nuclear threat and increased instability in the world.

Yoon made the remark at the start of a trilateral meeting with U.S. President Joe Biden and Japanese Prime Minister Fumio Kishida on the sidelines of the North Atlantic Treaty Organization (NATO) summit in Madrid. 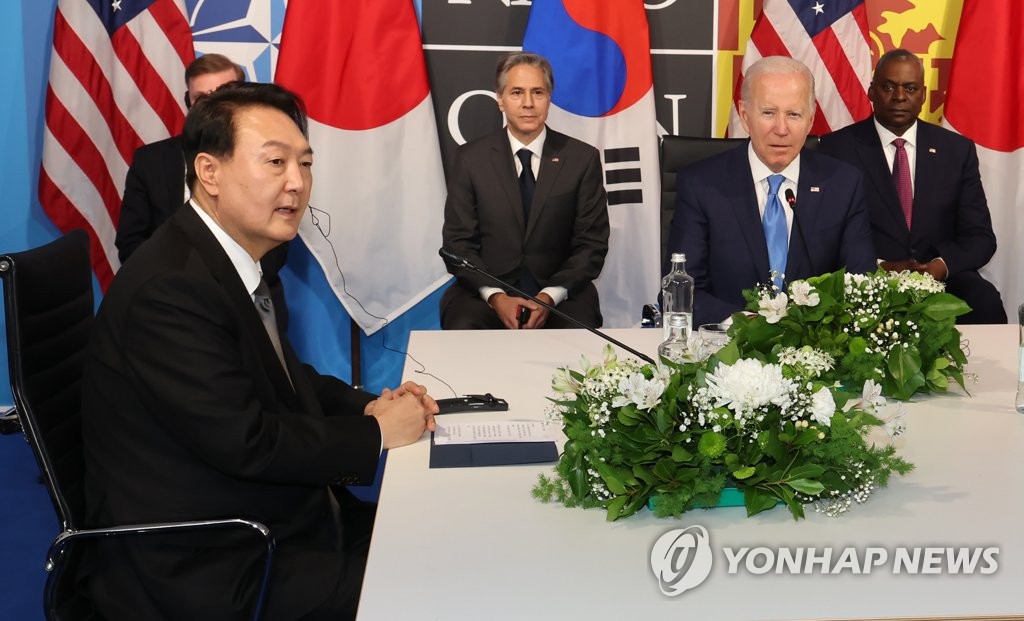 "With North Korea's nuclear and missile threats becoming more sophisticated and increased instability in international affairs, the importance of cooperation between South Korea, the U.S. and Japan has become even greater," he said.

"Through this meeting, I look forward to cooperation between South Korea, the U.S. and Japan establishing itself as an important central axis for world peace and stability," he added.

Biden said in his opening remarks that trilateral cooperation is critical in achieving the three countries' shared objectives, including the complete denuclearization of the Korean Peninsula.

He also said there is ongoing concern about a possible nuclear test by North Korea.

The meeting was the first of its kind in nearly five years after the last one held on the margins of the U.N. General Assembly in New York in September 2017.

South Korea and Japan have seen their relations deteriorate in recent years due to protracted rows over historical issues stemming from Japan's 1910-45 colonial rule of the Korean Peninsula.

Washington has sought to encourage trilateral cooperation amid North Korea's nuclear threats and growing security and economic challenges from China.

"Security cooperation between South Korea, the U.S. and Japan has been restored as of today," a presidential official told reporters after the trilateral summit, saying the White House also described it as "historic" and "very successful."

The official said additional sanctions on North Korea were not on the table during the summit, but that the U.S. appeared to be prepared to expand sanctions against North Korean individuals and organizations to cut off sources of funding for Pyongyang's nuclear and missile programs.

"In terms of other additional sanctions, South Korea and the U.S. have held consultations but I can't discuss them now, as there are a lot of military and security issues involved," the official said.

The presidential office issued a separate statement on the results of the meeting.

"President Yoon called for responding strongly to North Korea's provocations in accordance with principles and continued close cooperation between South Korea, the U.S. and Japan so that North Korea will return to the dialogue table," it said.

The three leaders agreed continued advances in North Korea's nuclear and missile programs pose a serious threat not only to the Korean Peninsula but also to the region and the world.

They also agreed to hold close consultations on ways to strengthen the U.S. extended deterrence commitment to its allies and upgrade the level of security cooperation between the three countries in responding to North Korea's nuclear and missile threats.

Moreover, the three leaders shared the understanding that cooperation among their countries is critical -- as nations that share the basic values of a liberal democracy, human rights and the rule of law -- in responding to current regional and global issues, the presidential office said. 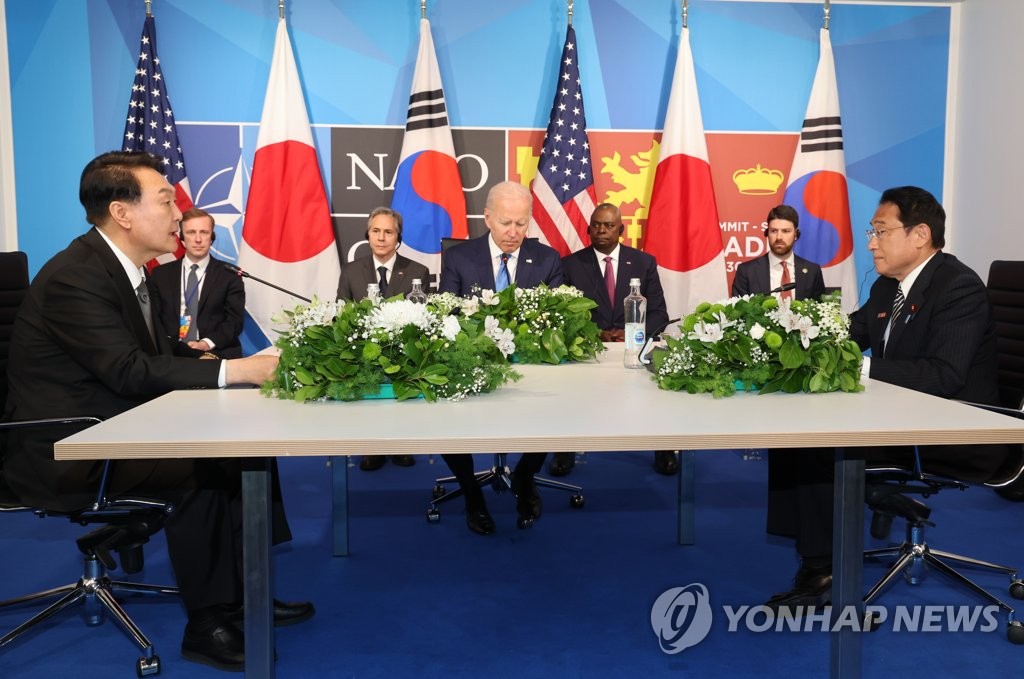