By Kim Eun-jung and Song Sang-ho

SEOUL, June 30 (Yonhap) -- China's top envoy in South Korea bristled Thursday at the North Atlantic Treaty Organization (NATO)'s labeling of his country as a "systemic challenge" and called on the military alliance to stop "provocative speech and acts."

Ambassador Xing Haiming made the remarks a day after NATO adopted its strategic concept that cited China as posing "systemic challenges to Euro-Atlantic security" in the first such public recognition of the Asian power as a major threat to the alliance.

The adoption of the concept came during a high-profile NATO summit in Madrid, where the leaders of South Korea, Japan, Australia and New Zealand were also present as partners in a sign of NATO's move to expand its reach to the Indo-Pacific region.

"(I) advise NATO to stop spreading false facts against China and (stop) provocative speech and acts, and to not soil Asia and the whole world," Xing said in Chinese during a forum marking the three decades since the establishment of diplomatic ties between Seoul and Beijing. 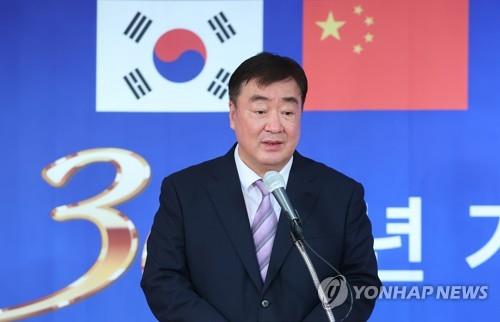 Xing added, "The NATO summit called China a systemic challenge, and (I) sternly oppose it."

Calling NATO a "byproduct of the Cold War," the ambassador accused the alliance of creating hypothetical adversaries and fomenting bloc-based confrontation.

Recalling NATO's 1999 bombing of Chinese embassy in then-Yugoslavia, Xing said the Western alliance "has yet to pay off its debt" over the incident that killed three Chinese journalists and enraged the Chinese public.

The envoy also called on South Korea to play a role as a "lubricant" in relations between the United States and China -- remarks that took on geopolitical undertones as the Yoon Suk-yeol administration is moving to deepen the alliance with Washington.

"(We) hope that (South Korea) establishes desirable bilateral relations with the U.S. and China from the standpoint of constructive, long-term interests," he said.

In the lead-up to Yoon's participation in this week's NATO summit, China's foreign ministry made a thinly-veiled criticism, highlighting its opposition to any move to "bring in the military bloc to the Asia-Pacific and incite division and confrontation."

In a swipe at U.S. foreign policy, Xing reiterated Beijing's claim that America has been trying to deter China and often interfering with "internal affairs."

"The U.S.' policy toward China is full of paranoia," he said.