SEOUL, July 1 (Yonhap) -- North Korean health authorities have concluded its COVID-19 outbreak originated in an area near the inter-Korean border as local residents came into contact with "alien" stuff there, state media reported Friday, a move seen as aimed at ascribing the virus crisis to South Korea and using it for political purposes.

The official Korean Central News Agency (KCNA) cited a probe into the transmission route of the omicron variant outbreak, which Pyongyang made public on May 12.

"The investigation results showed that several persons coming from the area of Ipho-ri in Kumgang County in Kangwon Province to the capital city in mid-April were in fever," it said in an English-language article. "A sharp increase of fever cases was witnessed among their contacts and that a group of fevered persons emerged in the area of Ipho-ri for the first time."

The KCNA added that an 18-year-old soldier and a 5-year-old kindergartener had contact with "alien things" in the area in early April and that they had tested positive for the virus after showing symptoms.

It added that the State Emergency Epidemic Prevention Headquarters issued an instruction stressing the need to "vigilantly deal with alien things coming by wind and other climate phenomena and balloons in the areas along the demarcation line and borders."

The instruction also called for strengthening the reporting system of the "alien things" and measures to strictly remove them, according to the KCNA. 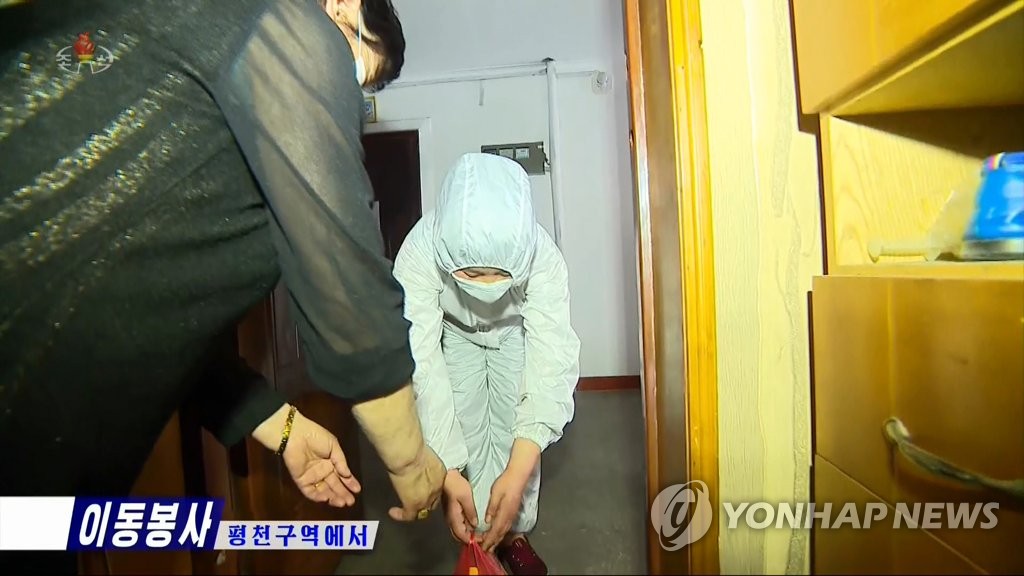 Although the North did not specify what the "alien things" were, it alluded to balloons often flown by North Korean defector groups in South Korea, carrying such materials as anti-Pyongyang propaganda leaflets, portable radios and U.S. paper money, over the heavily fortified border.

The leaflets have been a source of tension between the two Koreas, with the Kim Jong-un regime angrily responding to the issue.

It has strongly demanded the South's government take tougher measures to stop such a leaflet-sending campaign, even warning of a military response from border regions.

By linking the virus crisis with South Korea, albeit indirectly, the North appears to be seeking to stimulate public antipathy toward Seoul or leaflet-spreading activists as well as trying to discourage its people from picking up those materials, observers said.

The South Korean government immediately dismissed the North's assertion, saying there is no possibility that its coronavirus outbreak is connected with such materials from the South.

There is a "common view" of South Korean and international health care organizations and experts that COVID-19 infection through the virus on an object's surface is realistically impossible, Cha Duck-chul, the unification ministry's deputy spokesperson, said during a press briefing.

"As far as we know, there have been no officially verified cases of coronavirus infection via postal or other materials," he said.

Meanwhile, the North's new suspected COVID-19 cases remained below 5,000 for the second consecutive day, according to state media.

More than 4,570 people showed symptoms of fever over a 24-hour period until 6 p.m. the previous day, the KCNA said, citing data from the state emergency epidemic prevention headquarters.

It did not provide information on whether additional deaths have been reported.

The total number of fever cases since late April came to over 4.74 million as of 6 p.m. Thursday, of which more than 4.73 million have recovered and at least 8,130 are being treated, it added.

The North's daily new fever count has been on a downward trend after peaking at over 392,920 on May 15.