Poland is working on a comprehensive energy blueprint that involves building six nuclear reactors by around 2043, and South Korea's Korea Hydro & Nuclear Power Co. in April submitted a proposal to win the deal worth over US$40 billion.

During a meeting with Poland's Climate Minister Anna Moskwa in Warsaw on Thursday, Lee explained Seoul's advanced nuclear power technologies and safety and voiced hope for stronger industry ties through the project, according to the Ministry of Trade, Industry and Energy.

The two sides agreed to enhance exchanges and cooperation in nuclear energy, hydrogen, e-mobility and other energy fields by signing a memorandum of understanding.

They also vowed to hold a joint energy committee meeting between their governments on a regular basis for detailed discussions, it added. 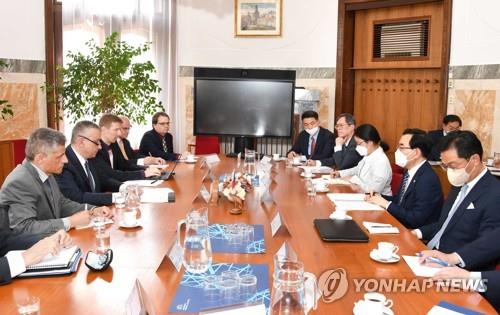 Lee also met with Ryszard Terlecki, the deputy speaker of the Polish parliament, and asked for parliamentary support for and attention to South Korea's bid to take part in the nuclear project.

If South Korea wins the contract, it will be the country's first full nuclear plant project since 2008, when it signed a nuclear power deal with the United Arab Emirates (UAE) for the Barakah reactors construction project.

Following the meetings, Lee joined some 300 officials in the nuclear power sector from the two nations to attend a joint session meant to deepen their relationship.

During the event, the two nations signed a total of nine memorandums of understanding on nuclear energy fields, which involved six South Korean companies and nine Polish entities, the ministry said.

Lee is in Poland for a two-day visit, which came after a trip to the Czech Republic for energy cooperation. It is his first overseas trip since taking office last month.

They met on the sidelines of the North Atlantic Treaty Organization summit in Madrid.