SEOUL, July 4 (Yonhap) -- The new culture minister said Monday that public opinion is the most important factor in determining whether to give K-pop superstars BTS exemptions from active military service.

"Military service is a sacred duty," Culture, Sports and Tourism Minister Park Bo-gyoon said during his first meeting with reporters since he took office in May.

"Second, BTS has increased the world's awareness of Korean culture and greatly improved Korea's brand image, and third, we should strike a balance of pure art fields and pop culture," Park said during the meeting at the government complex in the central city of Sejong.

"I think public opinion is important, above all, even though we should reflect these three factors," he said, adding he has been delivering public opinions on the issue to the Military Manpower Administration and the National Assembly. 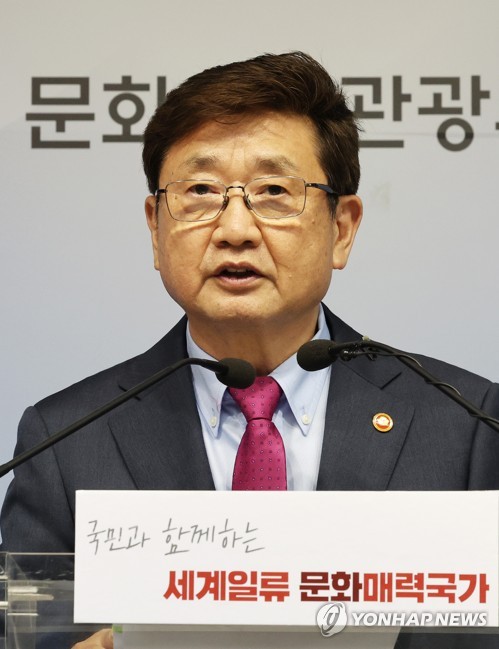 In May, his predecessor Hwang Hee called for prompt parliamentary passage of a bill that would include globally recognized male pop culture artists like BTS in a program that would allow global award-winning athletes and classical musicians to do alternative services in their respective fields instead of serving in active military duty.

"The system has been operated meaningfully to give those who have enhanced the national status based on their excellent skills more chances to contribute to the country, and there is no reason the popular art-culture field should be excluded from this," Hwang said.

In South Korea, all able-bodied men are required to serve in the military for about two years.

Jin, the oldest member of BTS, faces enlistment by December.

As the nation remains divided over the issue, BTS recently announced a pause in major group activities to focus on solo projects.