KUNSAN AIR BASE, South Korea, July 8 (Yonhap) -- F-16 fighters roared over a key U.S. air base in the southwestern city of Gunsan while ground maintenance staff checked JADAM penetrator bombs and others added to its evolving arsenal new technologies like "dronebusters."

The routine yet indispensable daily operations on Thursday underscored their priority on readiness -- a core value guiding the U.S. Air Force's 8th Fighter Wing, better known as the "Wolf Pack," a nickname given for its tactful combat missions in the 1960s.

Yonhap News Agency had a rare opportunity for an exclusive tour of the high-profile unit's key facilities at Kunsan Air Base in the city, 275 kilometers south of Seoul, as tensions lingered on the Korean Peninsula following a fusillade of North Korea's ballistic missile launches and its reported preparations for another nuclear test.

"The 8th Fighter Wing is laser-focused on our threat to the North. That is our primary focus," Commander Col. Henry R. Jeffress said, highlighting the wing's commitment to the "ironclad" South Korea-U.S. alliance formally forged after the 1950-53 Korean War. He added, "Absolutely, I'd say we are fully ready, and that is with confidence and based upon the commitment to the alliance. The simple fact is that since 1953, we've been doing this and it's unwavering."

His wing is the Gunsan base's host unit and assigned to the Seventh Air Force headquartered at Osan Air Base in Pyeongtaek, 70 km south of Seoul. It runs 45 F-16s and manages a growing arsenal of menacing weapons, including the GBU-31 V(3) Joint Direct Attack Munition (JADAM) bomb and the AIM-120 Advanced Medium-Range Air-to-Air Missile (AMRAAM). 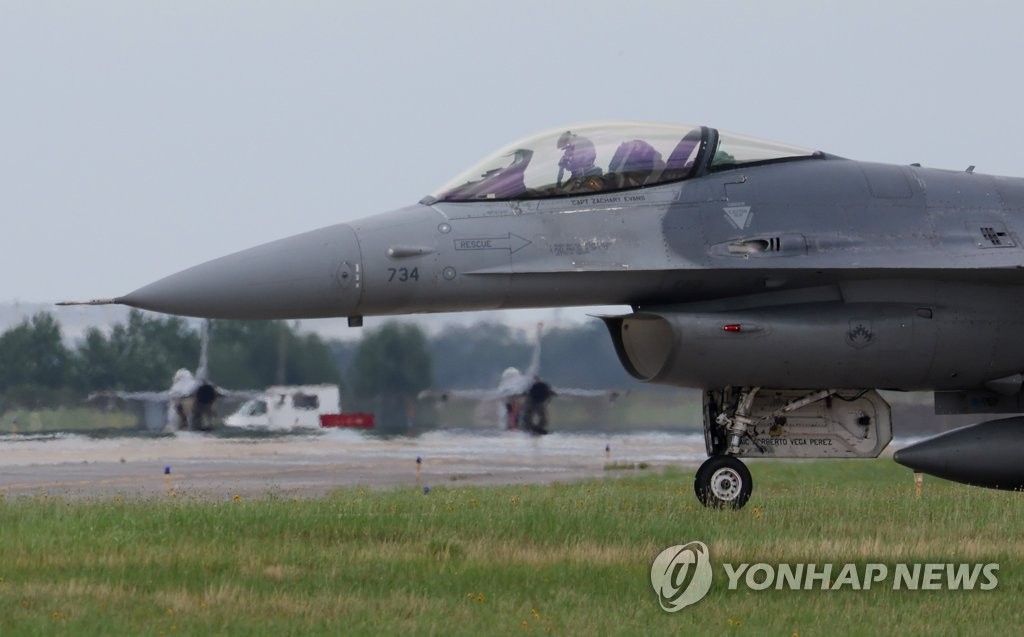 Its weapons systems remained in top shape to ensure the readiness of the Wolf Pack for its contingency missions, including air interdiction, close air support, air superiority and suppression of enemy air defenses.

At a munition storage hangar, the unit showed the GBU-31 guided bomb equipped with a penetrator warhead, which Calvin Kanorr, a technical sergeant, portrayed as an "answer" to growing North Korean threats.

"North Korea has a lot of bunkers and like subterranean hideouts and headquarters," he said, noting the JADAM bombs are only a "fraction" of what the wing has. "If you want to hide underground, we have a bomb that can dig and go find you underground."

Key components of the bomb, like the fuse and the in-flight control device, are checked every year by skilled personnel who Kanorr said can disassemble and assemble the bomb even "in their sleep." Maintenance work on a single bomb unit takes a little less than an hour. 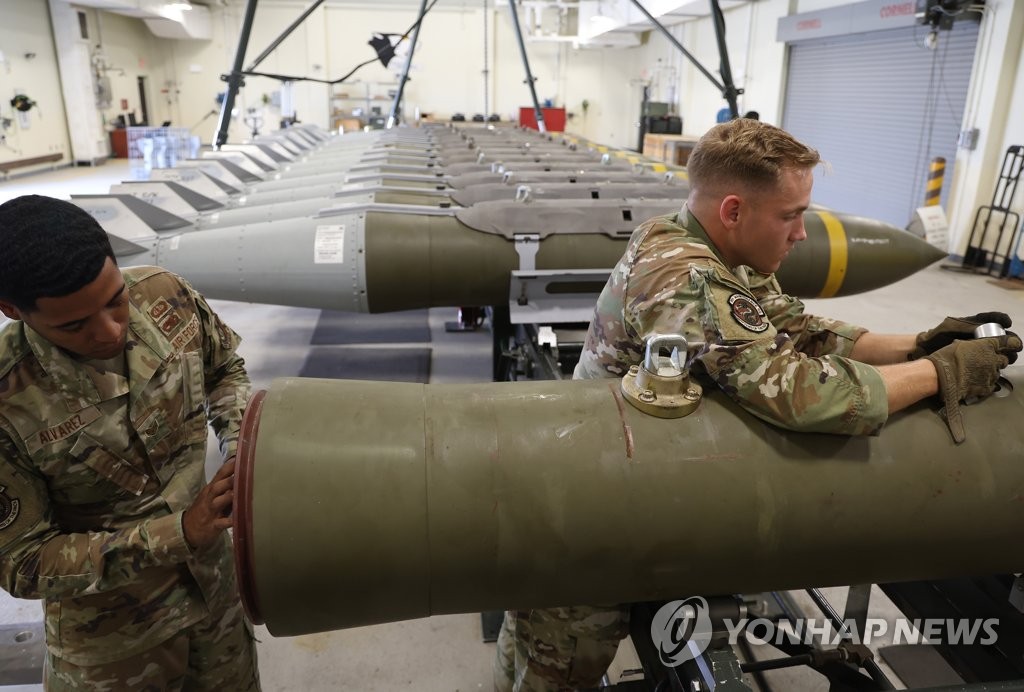 It marked the wing's first media invitation for a first-hand look at such formidable weapons since COVID-19 outbreaks in Korea, its public affairs office said. Such a display of firepower coincided with stepped-up efforts by Seoul and Washington to sharpen deterrence against an increasingly provocative Pyongyang. 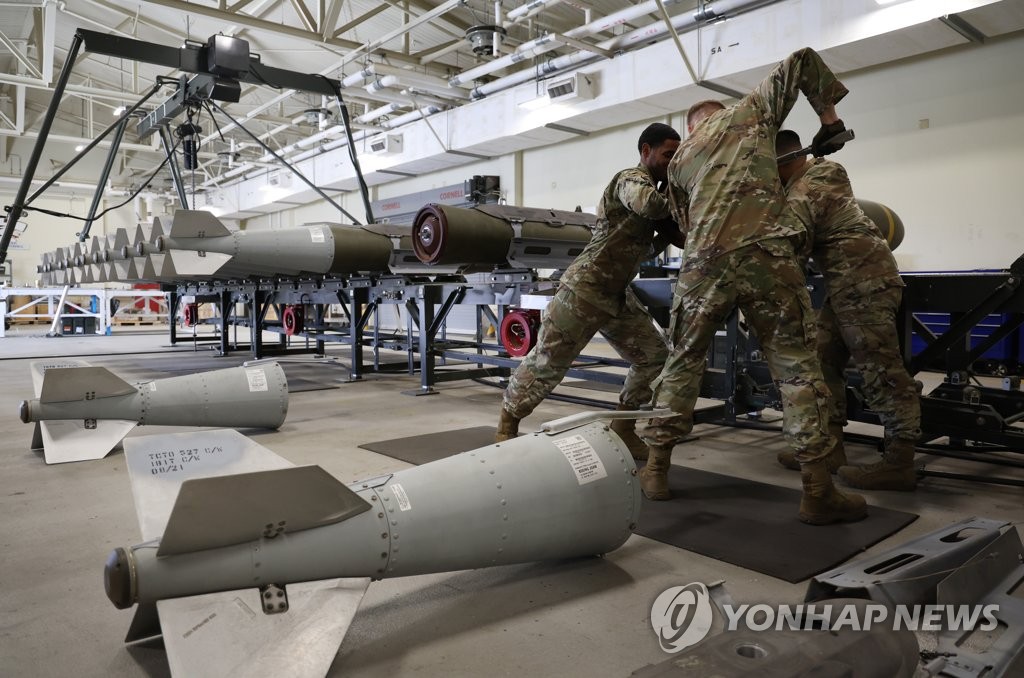 On Tuesday, six U.S. F-35A radar-evading fighters arrived at the Gunsan base from the Eielson Air Force Base in Alaska to join allied air drills -- the first public deployment of America's fifth-generation warplanes here since late 2017.

On the rare dispatch of the stealth jets, the wing's commander refused to comment but emphasized their combined drills with the South Korean counterpart will mark a "critical" opportunity to integrate for stronger combined defense.

"We are always looking for opportunities to stay ready," Jeffress said.

Aside from the existing conventional arms, the wing has been constantly embracing new technologies to respond to emerging challenges, like potential drone attacks by the recalcitrant regime in Pyongyang.

Since August last year, the unit has been running the X-MADIS, a mobile counter-drone solution that detects, locates, identifies and defeats small hostile unmanned vehicles through signal disruptions. X-MADIS is used together with dronebusters, another piece of equipment to fend off drone-based threats.

"It interferes with the signals of the (hostile) drone. That's how we defeat the drone because you don't have to destroy it to defeat it," 1st Lt. Andre Vertucio at the 8th Security Forces Squadron under the wing said. "You just have to make sure the person controlling it can no longer control it to make it land." 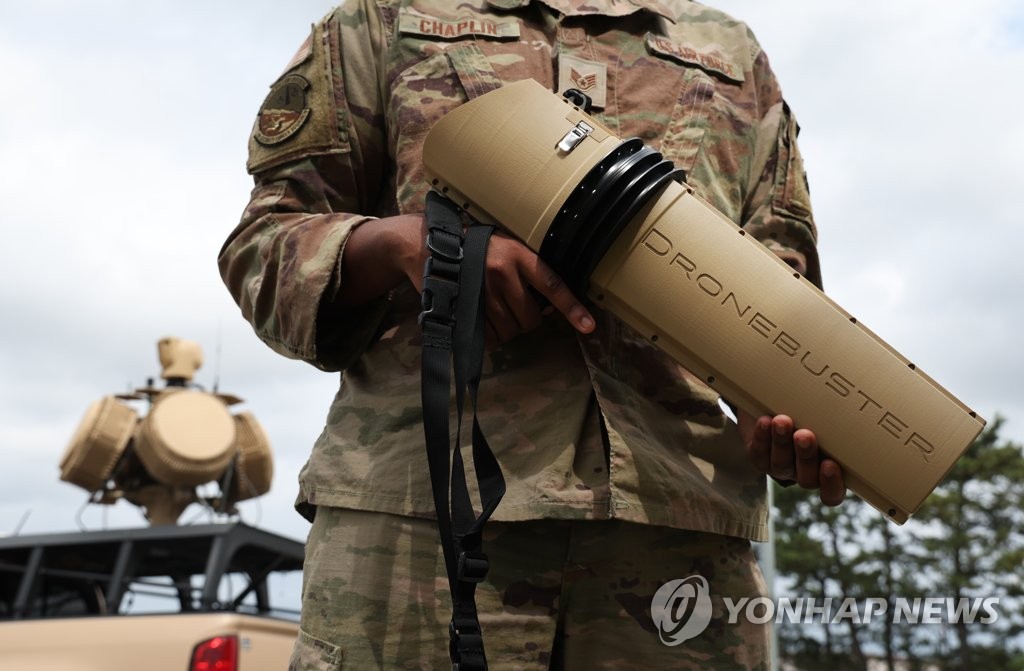 Vertucio pointed out that such new pieces of equipment underline his unit's constant push for readiness.

"The Wolf Pack is ready for anything. We are constantly evolving, constantly training," he said. "We have plans for everything."

On the taxiway of the air base, three F-16 fighters waited for control tower signals to take off for routine readiness flight operations. The roar of their flybys overhead was another message of the unit's readiness, a theme that reverberated throughout the tour of the wing. 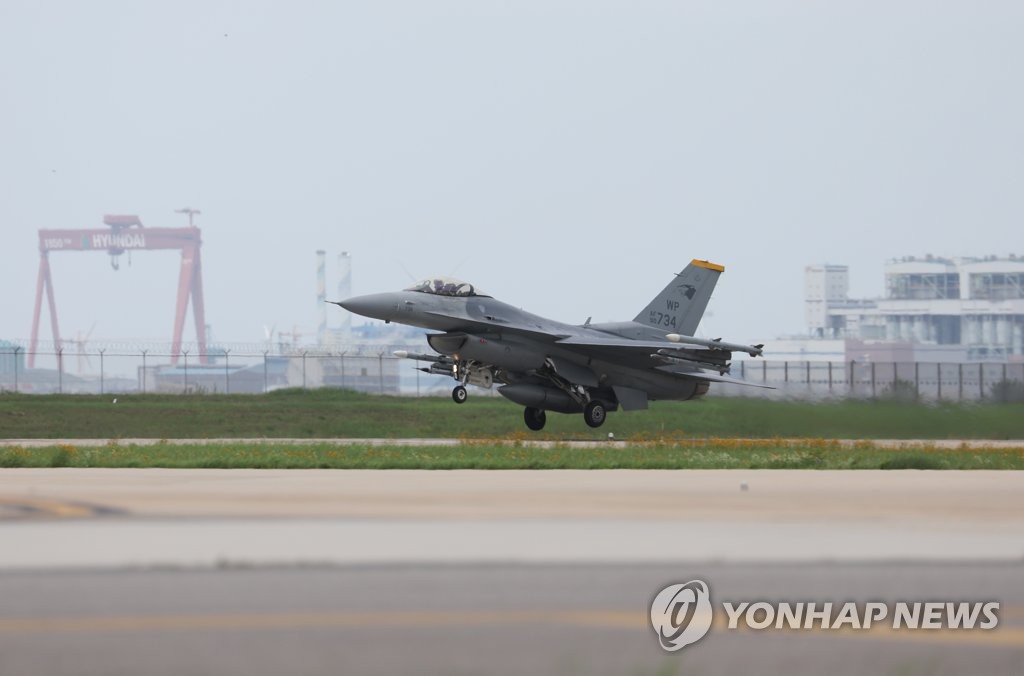 Aside from the military hardware, service members lie at the heart of the wing's readiness, its commander stressed. The Kunsan Air Base has around 2,800 Air Force members, 110 Army soldiers and 20 U.S. civilians assigned.

"Our most vital assets are the human beings, the airmen that are showing up here thousands of miles away from families with their commitment to our ROK-U.S. alliance, and a commitment to the ironclad alliance," the wing commander said. ROK stands for South Korea's official name, the Republic of Korea.

For some in a nearby civilian community, the sound of the wing's flight and other high-profile operations has long been a major irritant -- a fact that the commander is well aware of.

"We understand that the noise can be very loud as they take off. But we also know that is necessary while trying to stay ready to defend 51 million (South Korean citizens)," the commander said. "We prioritize to try to be good neighbors. A lot of it is just communicating as we don't want to be bad neighbors. That is not the goal."

Asked to deliver a message of assurance for South Korean citizens increasingly wary of the North's saber-rattling, the commander gave a terse yet meaningful message: Watch our actions.

"Our actions have shown since 1953 that we are committed to the alliance and that should be reassuring that troops continue to travel and deploy and live in Korea to help with the mutual (defense) agreement," he said. 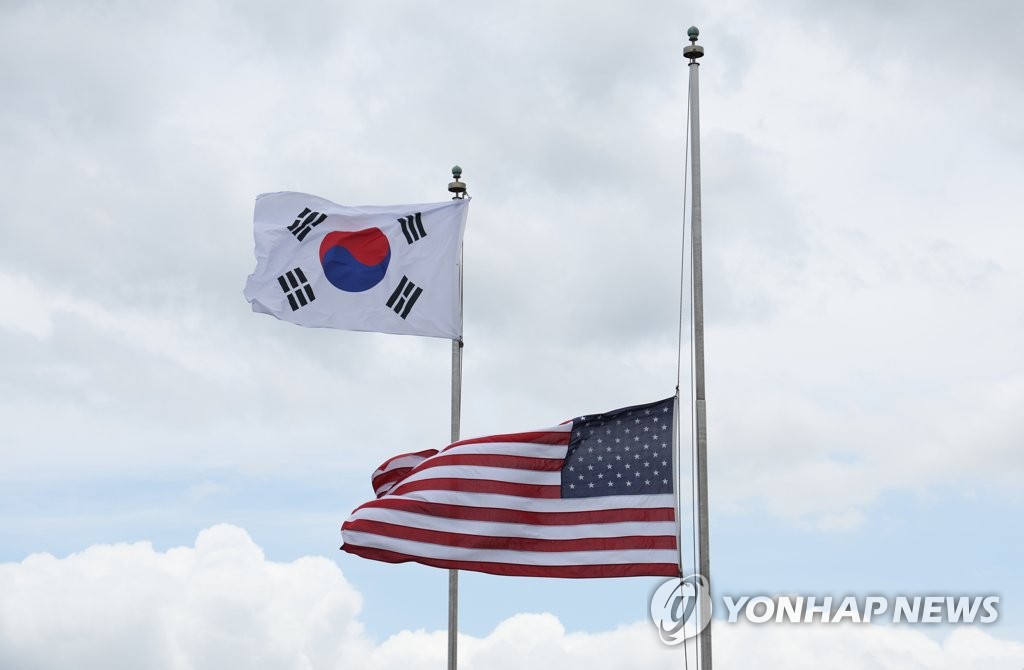