SEOUL, July 14 (Yonhap) -- After Jovian Turnbull picked up a foul ball during a South Korean baseball game last month, beating another fan in a frantic search in the stands, he raised his left arm in triumph and pumped his fist and then looked over to his right.

That's when Turnbull, a U.S. Army sergeant E5 who has been serving in South Korea for nearly two years, spotted a boy in a wheelchair, next to his father. 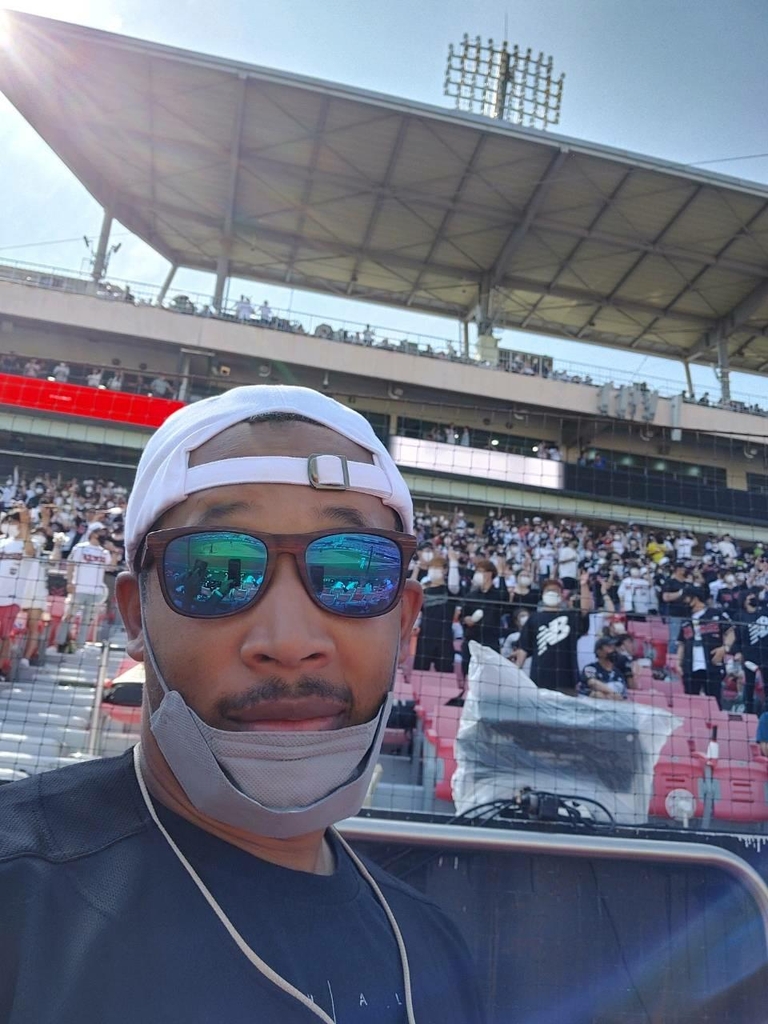 With nary a moment's hesitation, Turnbull climbed a few steps and gave the ball to the father, who then passed it to his son. As he returned to his seat, Turnbull bowed to the father and son after they thanked him for the ball.

A South Korean cable station broadcasting that Korea Baseball Organization (KBO) game on June 17, between the KT Wiz and the home team Doosan Bears at Jamsil Baseball Stadium in Seoul, captured Turnbull's act of kindness. The clip went viral on social media, and KT outfielder Cho Yong-ho, who hit that foul ball, even asked his team to find that fan so he could also show his gratitude. Turnbull was decked out in Cho's No. 23 jersey in that game.

The Wiz got in touch with Turnbull earlier this month through his friends who were at the game with him. To thank Turnbull for his act, the Wiz asked him to throw out the ceremonial first pitch before their home game on July 26 at KT Wiz Park in Suwon, 35 kilometers south of Seoul. 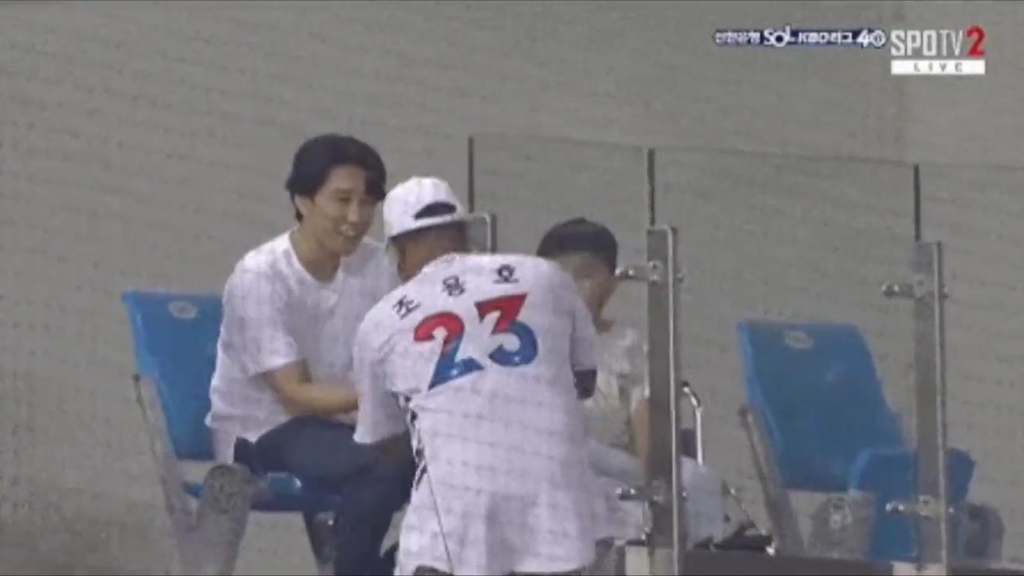 All of this has been a whirlwind for Turnbull, who hadn't even been to any baseball game before coming to South Korea. When the Wiz approached him about throwing the first pitch, Turnbull said he was "shocked and humbled."

"I didn't think that this one act of kindness would generate so much good karma," Turnbull told Yonhap News Agency in a phone interview on Tuesday. "I didn't do it for fame or anything like that. I didn't even know the cameras were watching me. I just did it because it felt like the right thing to do for me. And it's just really cool that my generosity is being appreciated."

Turnbull said he hadn't been aware of the boy's presence in the stands until after he'd retrieved the foul ball. And once he spotted the young fan, Turnbull made up his mind instantly.

"At that point, I knew that he deserved the ball more than I did," Turnbull said. "(Giving the ball to the boy) made me feel good about myself to be able to bring joy to somebody else that was less fortunate. So I am glad that I was able to do that for that kid."

Turnbull said he grew up a fan of American football and basketball, but he hadn't watched much baseball until he started playing it in a local league on his military base. "Everything that (baseball players) do is very difficult, and you have to be very skilled," Turnbull said. "It's a lot harder than it looks."

Turnbull is an outfielder, which is why he appreciates Cho, one of the KBO's top defensive outfielders.

"I like Cho Yong-ho because he plays a position that's really difficult and he makes the position look really easy," said Turnbull, who added younger slugger Kang Baek-ho is another favorite of his on the Wiz.

Since he is now playing the game himself, Turnbull isn't worried about embarrassing himself on the mound when he throws out the first pitch.

"I don't think I'll have a problem," Turnbull said.

Turnbull has gone to about a half-dozen KT games with friends so far, and he will never forget his first time.

"When I got there, I was completely blown away by the fans and the cheering, and how into it they are," Turnbull said. "And I thought KT played really well. And after that, I was hooked."

Turnbull may still be short on his KBO viewing experience but he has seen plenty already.

"I really like how, at the end of the games, it turns into a party. Lights go off, and they start having the lights flickering, and then you have the gentleman cheering in the middle of the stage and everybody else is dancing around him," Turnbull said. "I think it's also cool that if you're sitting in the lower levels, you can high-five the team. I think it's really generous of baseball teams to spend their time right after a game high-fiving fans that have been watching them play." 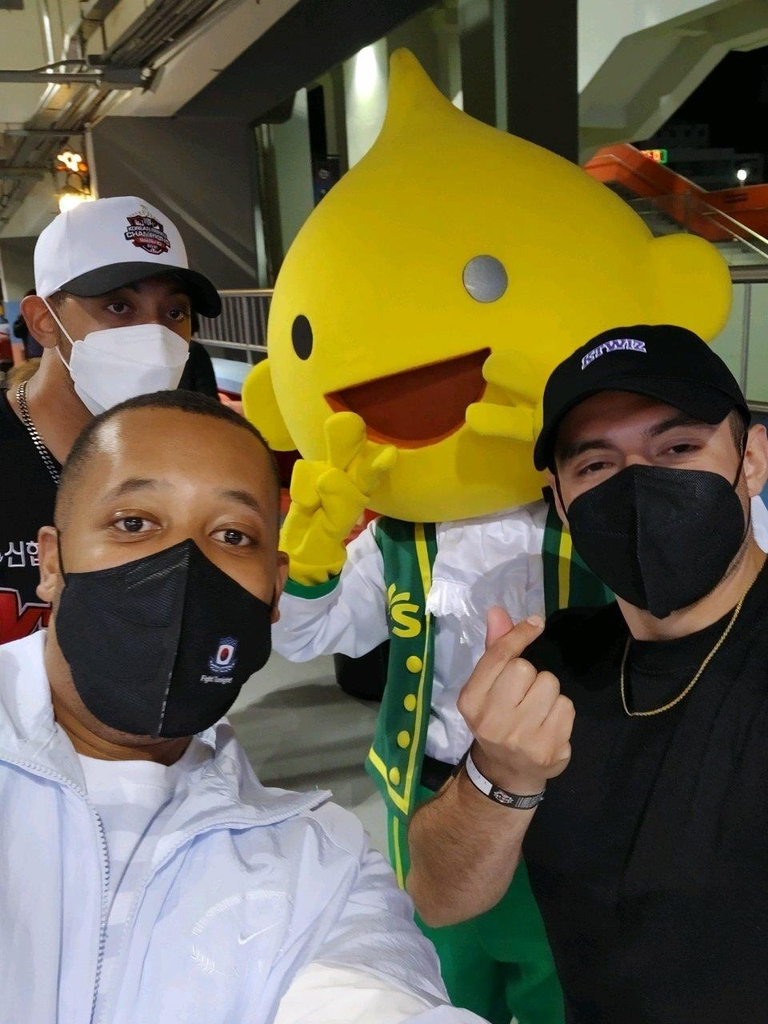 The Wiz won their first-ever Korean Series title in 2021, but Turnbull wasn't their fan yet. This year, they have overcome a mediocre start to put themselves back in playoff contention. Through Wednesday, they were in fourth place at 43-38-2 (wins-losses-ties), holding a one-game lead over fifth-place Kia Tigers while trailing the LG Twins by 7.5 games for third place.

With 61 games left this season, that's certainly not an insurmountable gap in Turnbull's mind.

"I think if (the Wiz) continue playing as well as they've been playing, I don't see why they couldn't take the third or the second slot (in the standings)," Turnbull said. "It would be perfect if they could get to the No. 1 spot, because then they get a bye all the way to the championship series. That would be ideal."