(ATTN: UPDATES with details in paras 7-8)

The partnership is aimed at bringing all-electric propulsion and hydrogen fuel cell technology to the AAM market, Hyundai said in a statement.

Hyundai expects the combination of its hydrogen fuel cell technologies and Rolls-Royce's aviation and certification expertise to accelerate the development of hydrogen fuel-cell propulsion systems.

"Hyundai has successfully delivered hydrogen fuel cell systems to the global automotive market and is now exploring the feasibility of electric and hydrogen propulsion technologies for aerospace integration," said Shin Jai-won, president in charge of the AAM business at Hyundai.

"We believe this will be the key technology to support the global aviation industry's goal to fly net zero carbon by 2050." 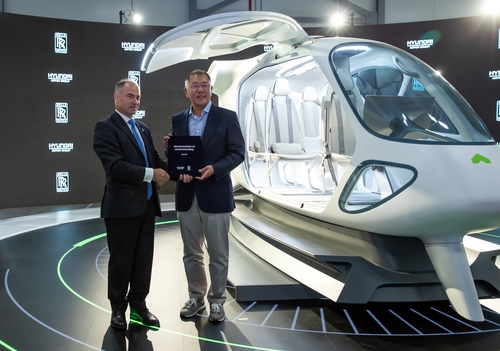 The benefit of using the hydrogen fuel-cell propulsion system in aircraft is that it is a zero-emission, silent and reliable on-board power source, the statement said.

On the same day, Hyundai Motor Group signed an MOU with French company Safran Group to jointly develop the propulsion system to be installed in the group's AAMs.

Supernal unveiled a peep into the future electrical vertical take-off and landing (eVTOL) aircraft concept, its design and technologies at the air show, which runs through Friday.

Supernal aims to commercialize the eVOTL aircraft in 2028, while collaborating with more than 50 companies, including affiliates of Hyundai Motor Group, to help ease related regulations and establish the infrastructure for UAMs.