SEOUL, July 31 (Yonhap) -- The defense chiefs of South Korea and the United States have agreed to reinforce both policy and military measures to reinforce the allies' readiness against evolving North Korean nuclear and missile threats, a Seoul official said Sunday.

During their talks in Washington on Friday, Defense Minister Lee Jong-sup and his U.S. counterpart, Lloyd Austin, decided to restart the allies' high-level Extended Deterrence Strategy and Consultation Group (EDSCG) meeting at an early date and strengthen the Table Top Exercise (TTX).

Seoul and Washington have been seeking to resume the EDSCG, a gathering of the allies' vice-ministerial defense and diplomatic officials, which was suspended in 2018 amid joint efforts to promote diplomacy with Pyongyang.

The EDSCG is a key policy dialogue that Seoul has been counting on to enhance the credibility of America's extended deterrence -- its stated commitment to mobilizing a full range of its military capabilities, including its nuclear options, to defend its Asian ally.

Expected to resume in September, the gathering itself is predicted to send a message of deterrence to the North, observers pointed out.

Along with the policy coordination, the two countries are also seeking to step up their military training.

TTX is an exercise aimed at practicing possible allied responses to hypothetical nuclear scenarios, like the North's nuclear blackmail, its impending nuclear use and actual use of nuclear arms.

"TTX is aimed at arriving at optimal allied responses in the event of the North's nuclear use," a military official told reporters on condition of anonymity. "The strengthening of TTX is in line with the efforts to enhance the credibility of extended deterrence."

At last week's talks, Lee and Austin also agreed to conduct this year's summertime combined training based on the concept of an "all-out" war, the official said, -- an indication of the breadth of the training set to take place from Aug. 22-Sept. 1.

The UFG was abolished in 2018 under the then liberal Moon Jae-in administration, as it remained keen on facilitating diplomacy with the North, which has decried the exercise as a war rehearsal. 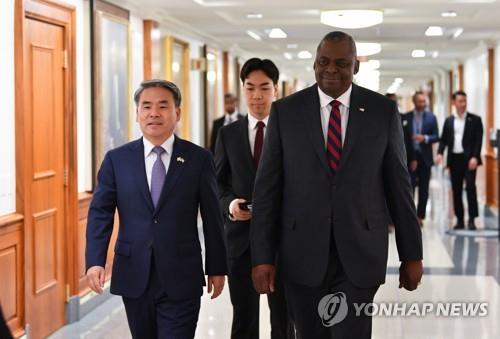