"Danuri is the Republic of Korea's advance party that will accelerate its push for a resources-strong country and help open an era of space economy," Yoon said in a Facebook post, referring to the lunar orbiter.

"I ponder about the message of dream, hope and persistence that Danuri will convey as it flies mightily across the vast space," Yoon said, adding he anticipates hearing the BTS song "Dynamite" the lunar orbiter will send.

The Korea Pathfinder Lunar Orbiter -- also known as Danuri, a Korean portmanteau for moon and enjoy -- made its first communication with a Deep Space Network antenna of the U.S. National Aeronautics and Space Administration in Canberra, Australia, at 9:40 a.m. (Korean time), about 90 minutes after being launched on a SpaceX Falcon 9 rocket from Cape Canaveral in the United States, according to the Ministry of Science and ICT. 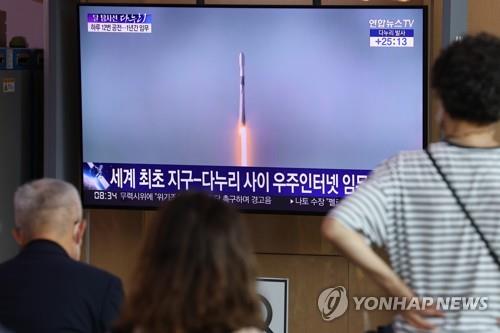