(ATTN: UPDATES throughout with results of talks)
By Kim Eun-jung

QINGDAO/SEOUL, Aug. 9 (Joint Press Corps-Yonhap) -- The top diplomats of South Korea and China agreed during their talks Tuesday that disputes over the issue of an advanced U.S. missile defense system should no longer hamper Seoul-Beijing relations, a South Korean official said.

In his first trip to China since taking office in May, Foreign Minister Park Jin held the meeting with his counterpart, Wang Yi, in the eastern port city of Qingdao.

It was widely viewed as crucial in setting the tone for Seoul-Beijing relations under the conservative Yoon Suk-yeol administration.

During the talks, both Park and Wang "clearly expressed their positions on THAAD, and at the same time, they shared the same view that the matter should not be an obstacle to the development of South Korea-China relations, going forward," the official told reporters on the customary condition of anonymity. 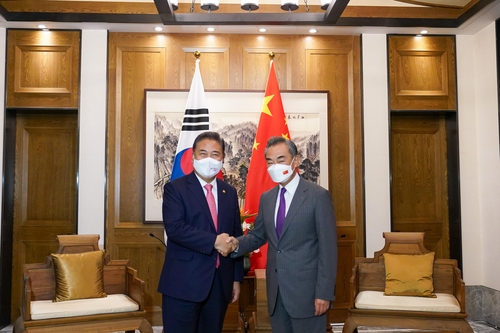 THAAD is the acronym for the Terminal High Altitude Area Defense system designed to shoot down ballistic missiles in their terminal phase. The system uses cutting-edge radar.

China is concerned the conservative Yoon government will expand the deployment of THAAD in South Korea in a bid to counter growing missile threats from North Korea.

The ministers also had discussions on the supply chain issue. Park notified Wang of Seoul's decision to take part in a preliminary meeting of a Washington-led semiconductor alliance, called Chip 4, involving Japan and Taiwan, according to the official.

Park made clear the decision was made "purely" in consideration of national interest, not intended to exclude or target any particular country, the official added.

Park arrived in Qingdao on Monday, becoming the highest-ranking official of the Yoon administration to visit China, two weeks before the 30th anniversary of the establishment of their diplomatic ties.

Speaking in front of pool reporters at the outset of the talks, Wang stressed the need for the two sides to "maintain independence and self-reliance" without being affected by "external obstacles."

He added both China and South Korea should protect stable supply chains in a win-win approach and should not interfere with each other's domestic affairs, while keeping "multilateralism."

His remarks came as rifts between Washington and Beijing have deepened over U.S. House Speaker Nancy Pelosi's recent trip to Taiwan.

In response, Park stressed South Korea and China, as "strategic cooperative partners," need to work together to overcome new challenges through the stable management of supply chains.

On regional security, he said peace and stability on the Korean Peninsula are confronted with unprecedentedly serious threats and requested Beijing's constructive role in persuading Pyongyang to opt for dialogue instead of provocations.

Ahead of the talks with Wang, Park had a virtual meeting with Korean residents and businesspeople in China.

Park admitted Seoul-Beijing relations are facing challenges that are not easy to handle.

He pointed out data showing that South Korea posted a trade deficit with China in May for the first time in 28 years.

"But the government will continue to strengthen economic cooperation with China," he said.

He also held a virtual conference with heads of diplomatic missions in China.

Park and Wang agreed to hold their talks in Qingdao in consideration of strict coronavirus curbs in Beijing, according to Seoul officials. Park is to return home Wednesday.