Seoul, Aug. 11 (Yonhap) -- Samsung Electronics Co. aims to raise the ratio of foldable phones to half of its total smartphone sales by 2025, a top executive has said, after the tech giant unveiled its latest foldable smartphones in an online event.

Samsung, the world's largest smartphone maker, will work to make its foldable smartphones another main column alongside the Galaxy S flagship series and a key category in the premium segment, Roh Tae-moon, president and head of Samsung's mobile experience (MX) division, said at a press conference in New York on Wednesday (U.S. time) right after the Unpacked online event.

Roh said Samsung's latest foldable series, the Galaxy Z Flip 4 and the Galaxy Z Fold 4, will help the company consolidate its leading position in the global smartphone market, despite continuing headwinds from recession fears and high inflation that have cut into consumers' purchasing power.

He stressed that the new foldable phones have "improved in both hardware and software aspects," especially in close cooperation with global mobile partners like Google, Microsoft and Facebook parent Meta.

The clamshell-style Galaxy Z Flip 4 is made to "go truly hands-free," allowing users to make phone calls, reply to texts and take photos without flipping the phone open, and has an improved user experience when uploading short videos on Facebook, WhatsApp and Instagram, according to Samsung.

The Galaxy Z Fold 4, which opens like a book, offers an enhanced multitasking and user-friendly screen environment with a layout similar to that of a PC, giving easy access to a user's favorite and recent apps.

Samsung said the phone also supports the drag-and-drop feature for Google applications, including Gmail, so that users can quickly and conveniently share files and photos, and copy and paste links.

According to industry tracker Counterpoint Research, foldable phones are the fastest growing smartphone type this year, which are forecast to grow 73 percent year-on-year to reach 16 million units.

In the first half of the year, Samsung led the market with a 62 percent market share, followed by China's Huawei with 16 percent, the research firm said, adding that Samsung's market share is expected to reach 80 percent in the second half thanks to the latest foldable series.

"We expect the new Galaxy Fold 4 and Flip 4 combo to continue Samsung's momentum in the space and sell close to 9 million units this year," analyst Jene Park from Counterpoint Research said.

During an earnings call last month, Samsung said while smartphone demand is forecast to slow in the second half amid prolonged geopolitical issues and economic uncertainties, it will try to boost flagship product sales and profitability by making foldable phones become the mainstream. 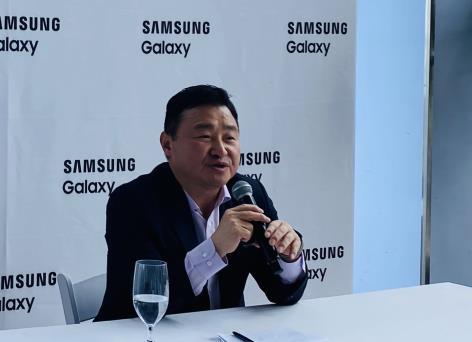