SEOUL, Aug. 14 (Yonhap) -- One hundred days into office, President Yoon Suk-yeol has seen his approval ratings more than halve to somewhere around 25 percent in the wake of unpopular personnel appointments and policy proposals, but no dramatic remedies are in sight.

Yoon was inaugurated on May 10 after winning the election by a margin of 0.73 percentage point, the closest vote ever in South Korea's history, foreshadowing a tough battle to win the hearts of not only his opponents but also the public at large. 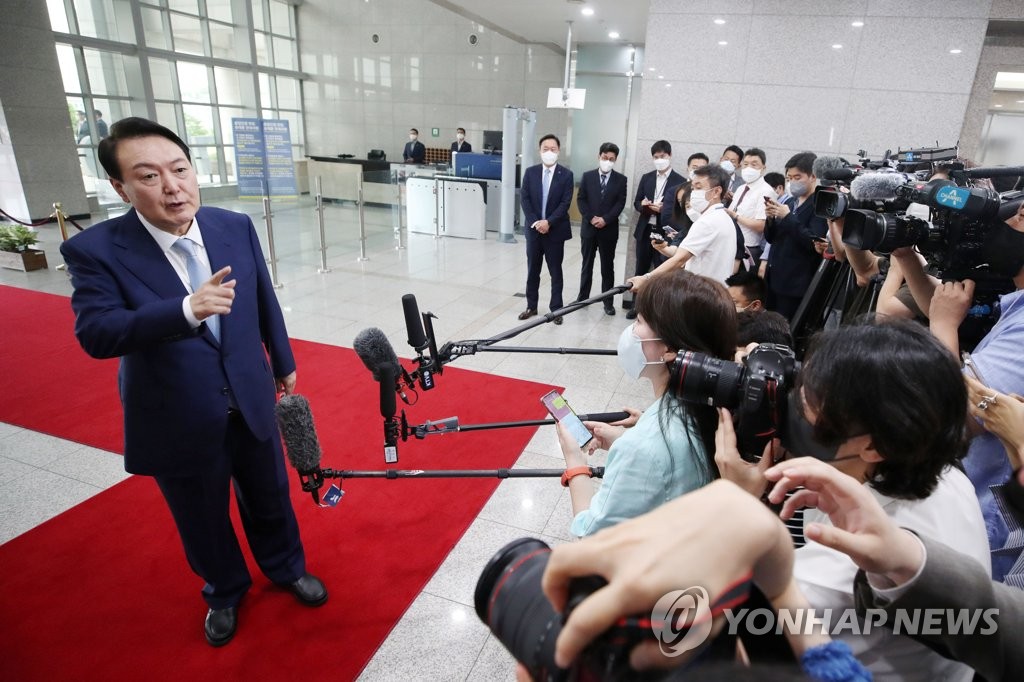 In his inauguration speech, he vowed to rebuild the nation on the foundation of a liberal democracy and a thriving market economy while promising South Korea's active participation in international affairs and an "audacious plan" to revive North Korea's economy in the event it took steps to denuclearize.

His early days in office offered some sights to see.

Unlike any previous president, Yoon commuted to work from his private residence. That was because he had insisted on keeping his campaign pledge to move the presidential office and residence out of Cheong Wa Dae, and he succeeded in doing so, though not with enough time to finish renovating what would be the new presidential residence before he began his term.

The new presidential office was in itself a novelty, having been relocated to what was then the headquarters of the defense ministry.

Yoon spoke to reporters on a near daily basis after introducing "doorstepping" Q&A sessions on his way to work, a demonstration of his commitment to communicating and connecting better with the people.

But the positive glow faded quickly as Yoon's seemingly unprepared, impromptu answers to reporters' questions -- such as his indignant response to criticism of his personnel choices -- appeared to chip away at his approval ratings.

What began as an approval rating of 52 percent in his first week in office was down to 24 percent by the first week of August, or only half of the 48.6 percent he won in votes during the election, according to Gallup Korea.

Yoon's personnel choices were cited as among the biggest factors behind the slide, the pollster said, as controversy erupted over Education Minister Park Soon-ae's plan to lower the elementary school entry age to 5. Park resigned last week.

The minister was not the only person to draw fire. Yoon's decision to abolish the first lady's office backfired when friends and acquaintances of first lady Kim Keon-hee were found to be accompanying and assisting her on official trips, including on Yoon and Kim's visit to Spain in June.

Economic challenges weighed heavily on the new administration as prices soared along with the interest rate and exchange rate. The COVID-19 pandemic showed no signs of abating as cases mounted with the spread of new variants, while flash floods in the capital area killed at least a dozen people and exposed deep flaws in the country's flood control systems. 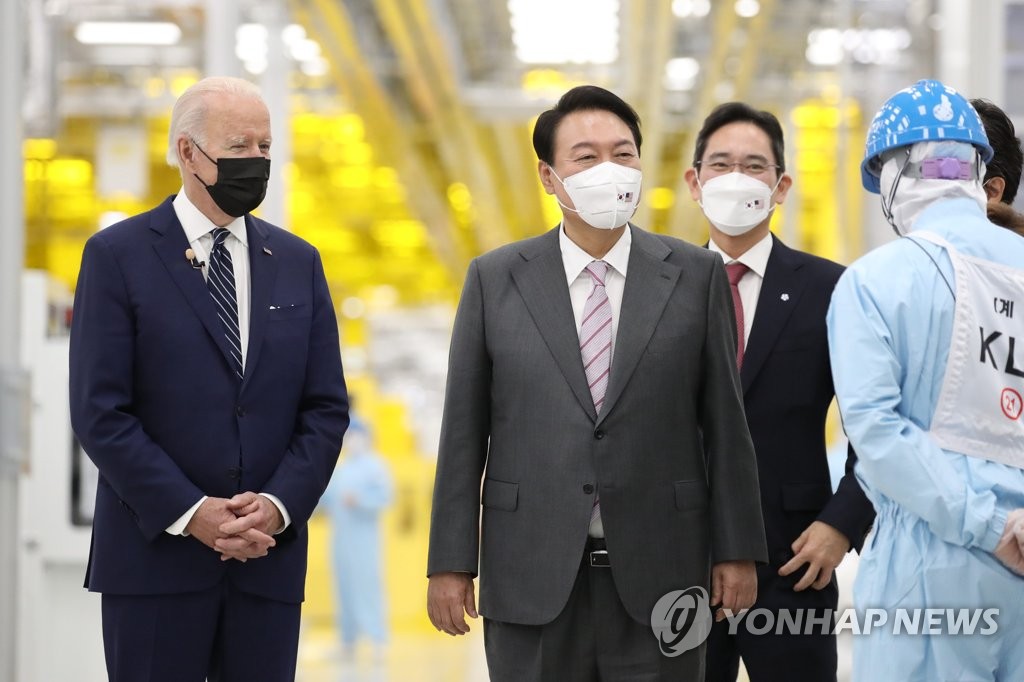 To add to the administration's woes, the ruling People Power Party was in a constant state of turmoil that was worsened by the embarrassing disclosure of texts Yoon exchanged with the party's floor leader in which Yoon was seen backbiting about suspended party leader Lee Jun-seok.

But his first 100 days saw progress on foreign policy.

Just 10 days after Yoon took office, U.S. President Joe Biden arrived in Seoul on his first visit to the country as president and demonstrated the allies' solidarity in the face of supply chain challenges and North Korea's nuclear threats.

On his first overseas trip as president, Yoon traveled to Madrid in June to attend a summit of the North Atlantic Treaty Organization (NATO) and held a series of bilateral summits with world leaders on the sidelines.

Though there was no bilateral meeting, Yoon also had several friendly encounters with Japanese Prime Minister Fumio Kishida, which generated much publicity as it demonstrated the two leaders' commitment to improving bilateral ties badly frayed under Yoon's predecessor, Moon Jae-in.

In his meetings with world leaders, Yoon sought to promote South Korean exports in the nuclear power and defense industries while asserting South Korea's alignment with global values and rules.

The emphasis on rules was interpreted as part of an effort to align with the United States in its apparent campaign to keep China in check.

When China claimed last week that South Korea had agreed to limit operations of the U.S. THAAD anti-missile system on its soil, the presidential office hit back, saying the THAAD issue was not subject to negotiation with Beijing. 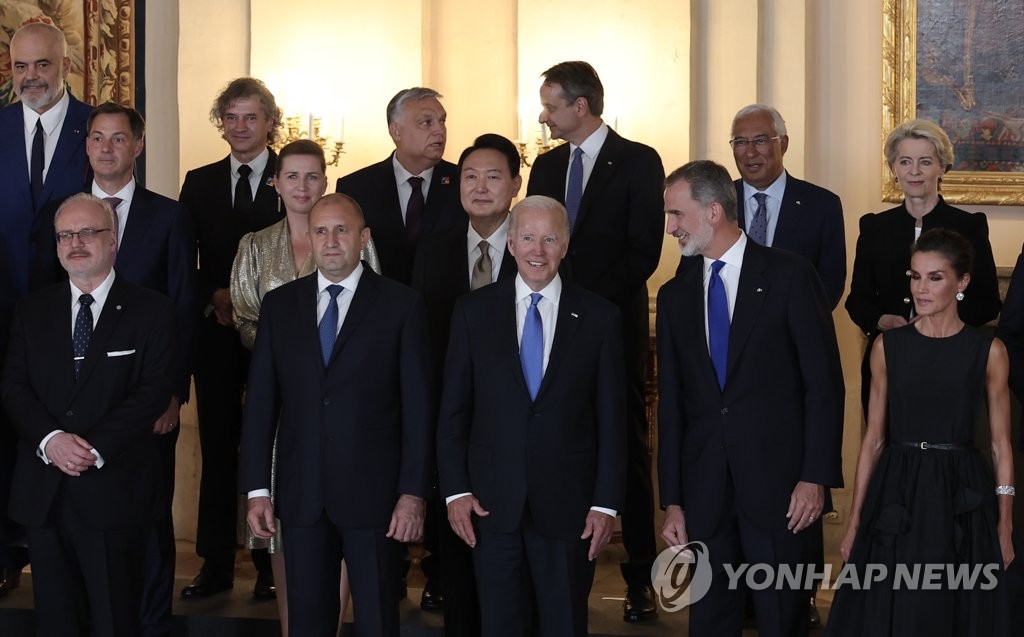