SEOUL, Aug. 17 (Yonhap) -- More than 6 in 10 South Korean companies expect the country's exports to fall in the second half of the year from six months earlier on weaker demand in China and other negative factors, a poll showed Wednesday.

The survey of 300 exporting firms, taken by the Korean Chamber of Commerce and Industry (KCCI), showed 64.7 percent of the respondents forecasting a drop in outbound shipments during the latter half.

Twenty-three percent answered there would be no great change, with a mere 12.3 percent anticipating an increase.

In the first half of this year, South Korea's exports climbed 15.6 percent on-year to a fresh half-year high of US$350.3 billion. 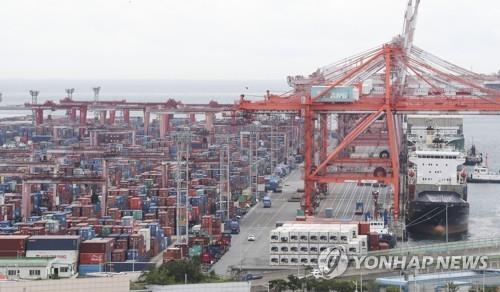 According to the findings, slightly over 44 percent said South Korea's exports would go south in the second half due to decreasing demand in China and other major trading partners.

Some 38 percent cited rising costs of parts and raw materials, with about 18 percent picking global supply chain disruptions stemming from a prolonged war in Ukraine.

Stung by a coronavirus lockdown in Shanghai, China's economy grew a mere 0.4 percent in the second quarter of the year, compared with a 4.8 percent expansion three months earlier.

The survey showed about 72 percent of companies doing business in China, South Korea's largest trading partner, projecting second-half exports to decrease from the first half.

In addition, 66 percent of the surveyed firms predicted South Korea's outbound shipments to shrink in 2023 from this year, with only 15.7 percent forecasting a rise.