The Seoul Central District Court made the ruling and ordered the immediate detention of Park after finding him guilty of most of his criminal charges.

The 77-year-old Park resigned as chairperson of Kumho Asiana Group and its affiliate Asiana Airlines in 2019 to take responsibility for controversial bookkeeping for the nation's No. 2 carrier.

He was arrested and indicted in May last year on the multiple criminal charges but was released on bail in November. 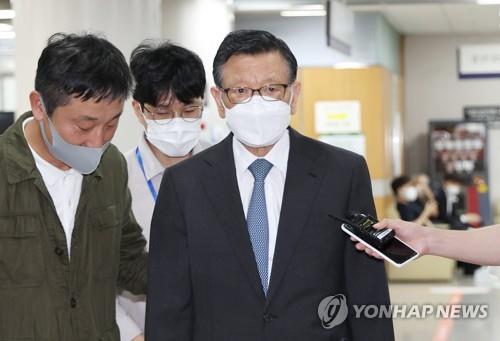 Park is accused of masterminding unfair inter-affiliate transactions in violation of the Monopoly Regulation and Fair Trade Act to rebuild the group and regain control of group companies.

Park was indicted for withdrawing 330 billion won (US$252 million) from four affiliates in 2015 to pay for the return of Kumho Industrial Co. shares from the state-funded Korea Development Bank and other creditors. Kumho Industrial was the parent company of Asiana Airlines.

Park was also charged with inflicting losses on Asiana by leading the airline company to undersell 100 percent of its shares in Kumho Terminal to Kumho Buslines, controlled by his family, and unfairly mobilizing nine group companies to offer unsecured low-interest loans of 130.6 billion won to Kumho Buslines.

"A large conglomerate must be guaranteed free activities as a management entity but at the same time must comply with the law and fulfill its social responsibilities," said the court.

"Taking advantage of group affiliates for the benefit of a private company can have very strong ripple effects by undermining corporate soundness and transparency, harming the legitimate interests of economic units and passing losses onto other companies," it said.

Three former group executives who were indicted on charges of colluding with Park in his alleged crimes were all given prison sentences of three to five years, also as requested by prosecutors, and put under detention.

The court also imposed a fine of 200 million won on Kumho Industrial for violating the fair trade law.