SEOUL, Aug. 23 (Yonhap) -- Global TV sales fell more than 6 percent from a year ago in the first half of this year on slow demand and macroeconomic woes, research showed Tuesday, as Samsung Electronics remained the top player in the TV segment.

In global markets, 92.6 million units of TVs were sold, down 6.6 percent from a year earlier. By value, the decrease was sharper at 12.5 percent, according to industry tracker Omdia.

Consumer electronics companies have been struggling to combat lackluster demand after two years of the pandemic-fueled surge in demand for personal devices and home appliances. The Ukraine-Russia war, runaway inflation and expensive borrowing costs all added to the woes.

By brand, Samsung took the top spot with a 31.5 percent market share, followed by LG Electronics Inc. at 17.4 percent, China's TCL Technology at 8.7 percent, Hisense, also a Chinese company, at 8.2 percent and Japan's Sony at 7.4 percent.

Since 2017, more than 36.5 million units of Samsung's Neo QLED TVs, one of its best premium products, have been sold, surpassing the 30 million mark in the first half.

In the meantime, LG kept its solid No. 1 spot in the OLED TV segment by selling 1.69 million units in the first half, about 62 percent of all global OLED shipments.

OLED TVs accounted for 33.2 percent of all TV sales by LG in the first half. 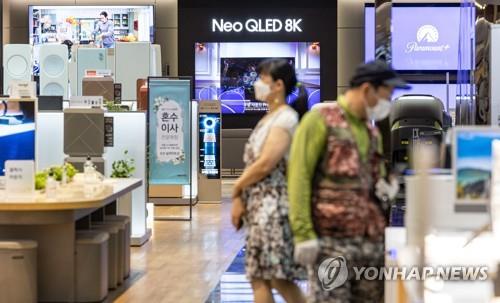