(ATTN: UPDATES with reaction from fans in paras 8-10, information on size of concert in lead and 3rd para)

SEOUL, Aug. 24 (Yonhap) -- K-pop superstars BTS will hold a massive live concert in Busan on Oct. 15 to support the southern port city's bid to host the World Expo in 2030, the group said Wednesday.

The septet said on K-pop fan community platform Weverse that the one-day concert titled "BTS <Yet to Come> in Busan" will take place on a makeshift stage to be installed in Gijang, northern Busan, in front of 100,000 fans.

It would mark the largest number of spectators for a single-day BTS concert in South Korea.

The show will be shown simultaneously on a large-screen at an outdoor parking lot of the Busan Port International Passenger Terminal with a capacity of around 10,000 people, as well as through online live streaming. Admission is free.

As a public relations ambassador for the Busan World Expo 2030, the band plans to engage in various promotional activities to promote Busan's hosting bid starting with the live concert, according to its label Big Hit Music. 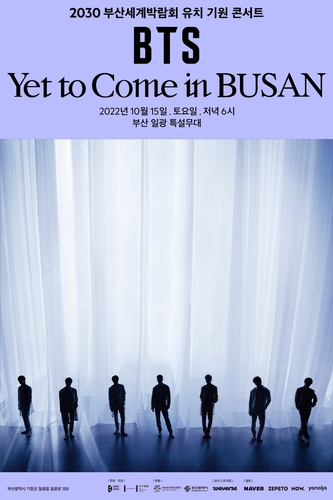 The show will be the septet's first performance in South Korea since March, when the group staged the Permission to Dance on Stage show in Seoul.

BTS announced in mid-June it will suspend performing as a group and focus instead on solo projects.

After the schedule for the group's upcoming concert was announced, accommodations near the concert venue were fully booked for the day before the show, according to Yanolja Co., a leading travel platform operator.

Fans took to social media to express their excitement at the news of BTS' first concert in South Korea in seven months.

But some others voiced concerns about safety of the artists and fans coming to see them at a concert venue that is not easily accessible through public transportation and is reachable via a narrow access road.

In late June, Hybe, the entertainment company behind BTS, signed a memorandum of understanding with the Busan city government to cooperate for its successful bid.

The World Expo, overseen by the International Bureau of Expositions, is one of the largest international festivals besides the World Cup and the Olympics.

South Korea, Russia, Italy, Ukraine and Saudi Arabia have submitted bids to hold the event in 2030. The final winner is expected to be announced in November 2023.
(END)